Zelda: The Wind Waker Proved We Don’t Always Know What We Want﻿ – Feature


To celebrate the 35th anniversary of The Legend of Zelda, we’re running a series of features looking at a specific aspect — a theme, character, mechanic, location, memory or something else entirely — from each of the mainline Zelda games. Today, Alex thinks back to Space World 2001 and the shock he experienced upon viewing the ‘cartoon’ Zelda for the very first time via a fuzzy, postage stamp-sized movie file…

Anyone who had their finger even slightly on Nintendo’s proverbial pulse back in 2001 remembers the initial reaction from fans to The Legend of Zelda: The Wind Waker.

For the uninitiated, let’s just say it was far from positive; certainly there were some who were excited but the drastic change in art direction after seeing a tech demo the previous year that much more closely resembled Ocarina of Time (but with many, many more polygons), but the response from most people was a resounding ‘wat’.

Zelda had been seen as one of the more ‘mature’ games in Nintendo’s line up for a goodly amount of time, and to see the franchise’s next gen debut look distinctly more cartoon-like caused ripples throughout the community. This reaction was slowly and assuredly galvanised by media outlets dubbing the game ‘Celda’, playing off the cel-shaded graphics that caused all this uproar.

Looking back on all this is a bit embarrassing really, not least because I myself was staunchly in the ‘noooooo my video game is ruuuuined’ camp. If the art style was being kiddified then surely the gameplay was going to be borked as well, and being the towering obelisk of maturity I was at nine years old, I was furious.

Then the game came out and proved to be one of the best-received entries in the series’ entire history. Nintendo took a hell of a gamble and not only drowned Hyrule under billions of litres of saltwater, but also gave us the ol’ switcheroo with so many of the classic tropes by allowing this current civilisation to have evolved from the land we once knew: Zoras ditched the water and became the air-swimming Rito; Kokiri grew closer to nature and become the wobbly little Koroks; Ganondorf grew a beard. 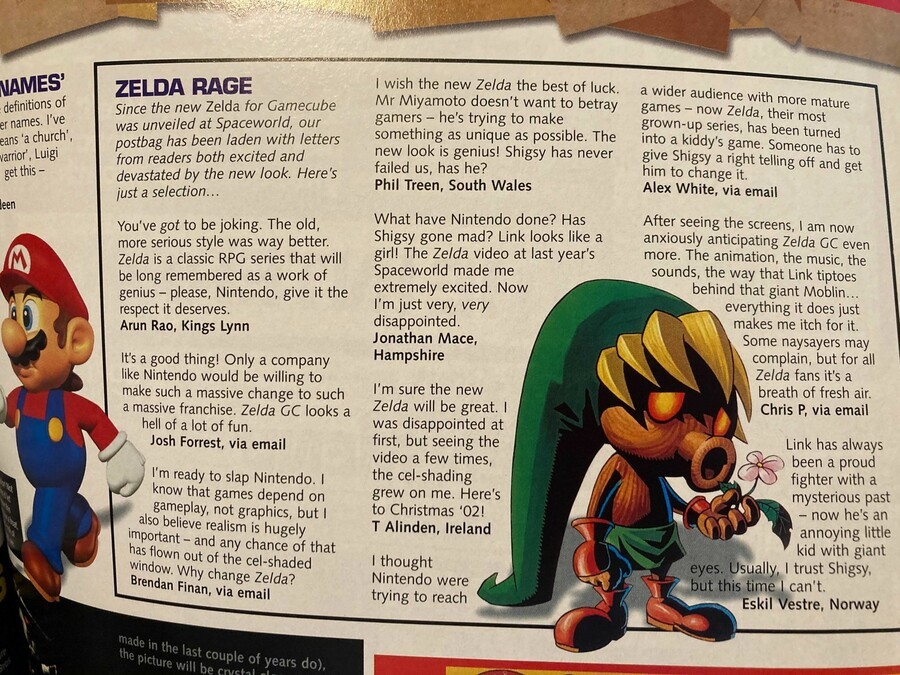 A sample of contemporary fan opinion from the December 2001 issue of NGC Magazine. Good ol’ ‘Shigsy’.

From a thematic point of view it reinvented so much of what we knew about Zelda and yet managed to tie everything back to the original lore we had become so familiar with. It’s a given these days, but playing it for the first time and discovering all the links to the past (pun evidently intended) was truly one of the most satisfying feelings I’ve ever had when playing a game. All the worry, all the doubt, all the thoughts that Nintendo were going in a totally different direction… it was all completely smashed apart, and the end result was all the sweeter for it.

And those graphics? People love them nowadays, and they did when they were new as well. Ironically, the lighting and other graphical tweaks Nintendo made when bringing the game to Wii U in HD form had us getting all defensive and pining for the classic, ‘flat’ toon-shaded look. Link’s expressiveness was unparalleled, enemy designs were appropriately exaggerated and original, and who can forget seeing that monster-despawning purple explosion for the first time properly? Compare it to something like Twilight Princess and you’d have a hard time arguing that the latter has aged better visually, despite it being what people ‘wanted’ at the time.

We’re a sensitive lot we Nintendo fans — we know what we like and we are often terrified that a new entry in a series will tarnish an otherwise spotless reputation like Metroid: Other M or something. Wind Waker proved that we don’t always know what we want, and whilst sometimes we may end up with a Metroid: Other M, other times we get a Breath of the Wild.

Blue Fire's Getting A Switch Physical Release This June