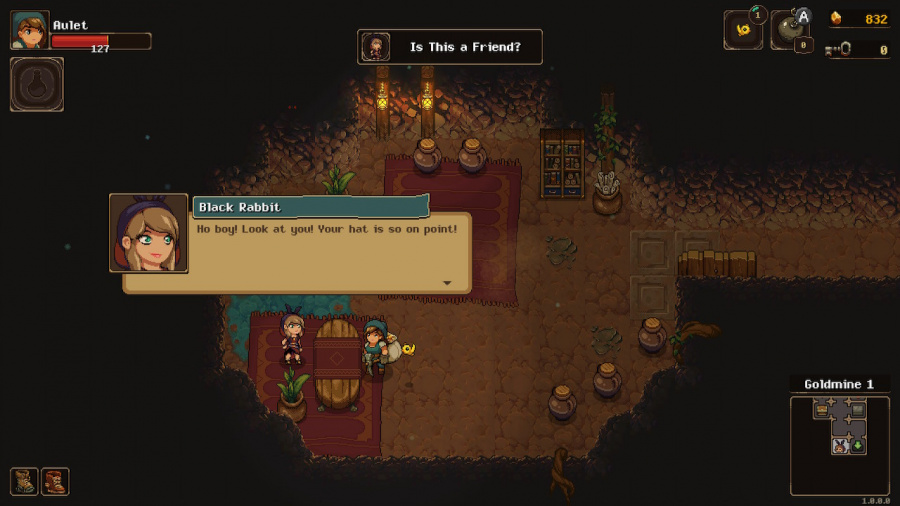 By this point in time, the roguelite genre has become positively saturated in the modern indie scene, spurred on no doubt by key success stories (like Dead Cells) over the last few years. This can be both a good and a bad thing; on one hand, fans of the genre are spoilt for choice when looking for another game to get into, but this also means it’s that much harder for new entries to stand out from the pack.

UnderMine – the latest release from Thorium Entertainment – struggles to differentiate itself from its peers in this respect; however, it more than makes up for a lack of originality by demonstrating a strong awareness of what makes the genre great. This is a fun game through and through, and it absolutely nails its gameplay loop.

UnderMine takes place in a kingdom being ravaged by earthquakes, which all seem to be originating from a mysterious mine. To deal with the problem, the king opts to utilize the bottomless supply of bodies that makes up the kingdom’s peasantry by throwing peasants in the mine one at a time in the hopes that someone – anyone – will solve the problem. As the player, this means that you take control of a new peasant for each run into the dungeon, and when they inevitably die, all their upgrades and remaining gold gets passed on to the next poor sod to get sent in. 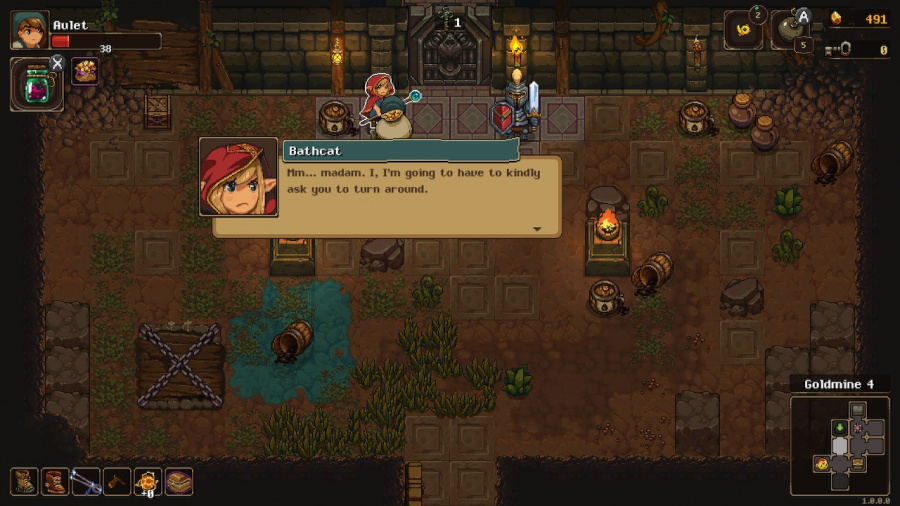 It’s quite the humorous take on the repetitive structure of a roguelite, and the writing keeps the overall tone similarly lighthearted. For example, the obituary for one of our first dead characters (killed by a fly) highlighted that they were survived by sixteen children, all of whom were pointed out to also be peasants.

Each run sees your new peasant dropped into a randomly-generated dungeon that bears more than a passing resemblance to those found in the old Legend of Zelda games or Binding of Isaac. You’re equipped with a pickaxe which you can either swing or throw like a short-distance boomerang, and the goal is simply to move from room to room in the hopes of finding stairs to take you to the next floor down. Along the way, each room is usually patrolled by a mixture of monsters and cave-dwelling wildlife which you have to dispatch, usually resulting in gold or other goodies being dropped.

Things get a lot more interesting when you factor in the relics which you can find on each floor, each of which grants you special extra boons for the remainder of that run. None of the relics that we found so far proved to be truly game-breaking, but they each represent a noticeable leap in power or function that rarely goes unappreciated. Getting boots that prevent you from falling into pits, for example, seems like a lame upgrade, but it can massively improve your survivability in most rooms. Unlike many of its genre peers, UnderMine manages to give you a nice sort of ‘power trip’ each run; relics are consistently reliable and always feel like another big step up for you. 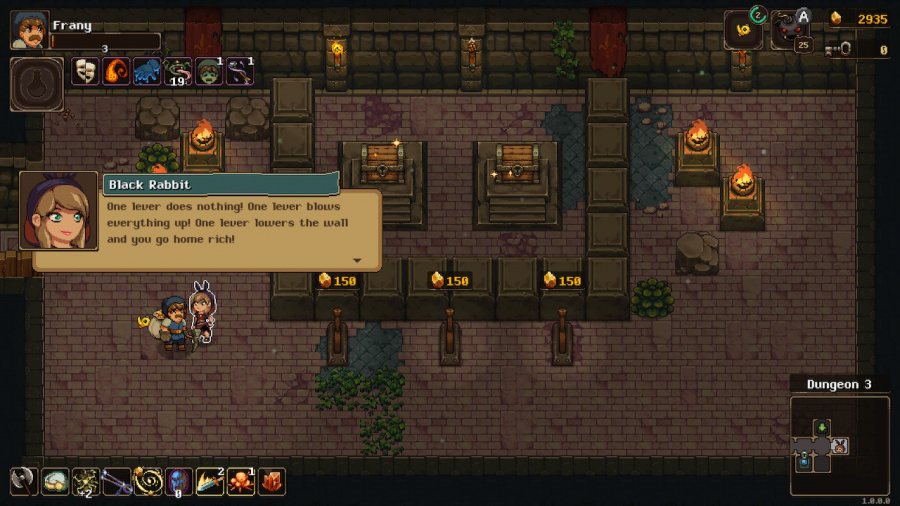 Going right along with this, UnderMine also uses a robust persistent upgrade system that calls to mind one of the best parts of Rogue Legacy. After each death, your peasant will drop around half of their gold, while the remainder will pass on to the next character to be spent back at the hub. Here, you’re given a brief respite before jumping back into the dungeon where you can buy items to give you a little bit of an extra edge to start off, or you can invest them in gradually pricier upgrades to things like health and damage output. Though the jumps are relatively small with these upgrades, they nonetheless begin to add up quickly over the course of several runs, and it’s nigh-on impossible to not be tempted back in to do ‘one more run’ to test out a new relic or upgrade you’ve unlocked.

Repetition over the course of many runs, then, is neatly sidestepped by the organic introduction of more content as you progress. For example, you’re prone to come across a blueprint every now and then on a trip which can then be taken back to the blacksmith to get a brand-new item which then has a chance of appearing in future runs. You also eventually progress far enough to find wholly new areas on deeper floors with their own sets of enemies, traps, and unlockables, and you can even unlock shortcuts to get to these areas faster on subsequent runs. It feels like you find something new or interesting on just about every run, which greatly incentivizes you to keep pushing on to unveil more secrets and see just how far you can make it this time around. 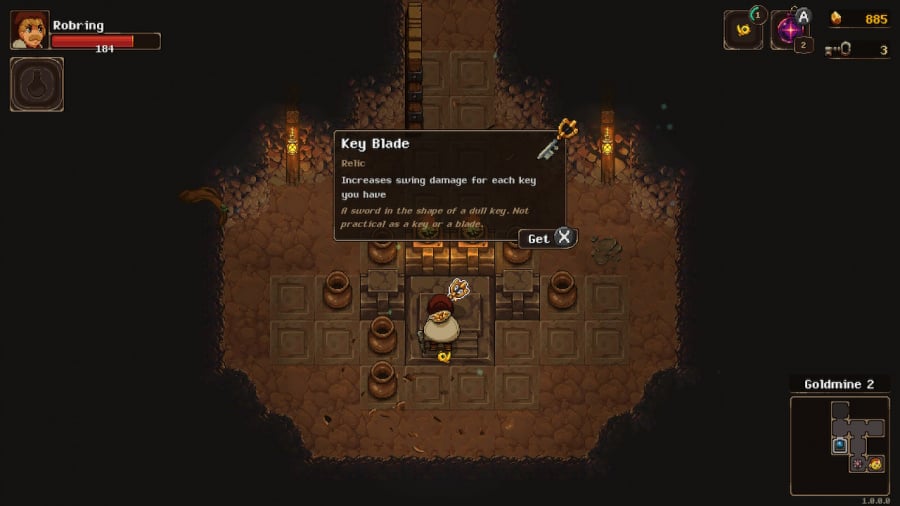 All of this is backed by a 32-bit art style that’s masterfully executed. Environments are rife with all sorts of fine details, like the somewhat warped real-time reflections of objects near pools of water, and the sprite-work and animation are full of expression. Pixel art may be seen as kind of trite these days, but it’s abundantly clear that the developers were anything but lazy in going with this direction. The only downside is that the general ‘underground’ aesthetic slightly dampens the visual diversity of each area, but this is really just a nitpick.

If you’ve read this far and have been thinking that UnderMine sounds derivative of past greats in the genre, you’re right. UnderMine’s greatest weakness is that it doesn’t really present any brand-new ideas or concepts that you haven’t seen before. However, what it does offer in spades is refinement. This is an experience that consistently demonstrates a careful understanding of what past games achieved, how they achieved them, and how to replicate those things or improve upon them.

There’s no jank to be found in the controls or performance, no undercooked ideas that throw off the gameplay loop, no extraneous elements that feel awkwardly included. Everything here is purposefully designed and thoughtfully implemented, which makes for an overall harmonic experience that few games manage to pull off. In short, UnderMine is an exquisitely well-polished game, to a degree that it’s almost shocking.

UnderMine is a ridiculously easy game to recommend. If you are at all a fan of roguelite games, you owe it to yourself to pick this up at your earliest convenience. UnderMine demonstrates clear mastery in its overall design, controls, upgrade systems and presentation, which all come together to make for a thoroughly engrossing experience. The one caveat is that those of you who are sick of roguelites won’t find anything to change your mind here; if you fall in that camp, it’s perhaps best to take a pass, even if you’re essentially missing out on one of the best examples of the whole genre. Otherwise, we’d give UnderMine a high recommendation; this is absolutely worth your time.