Home » Gaming » These Japan-Only Animal Crossing Figurines Are So Darn Cute, Fans Are Struggling To Find Them – Feature
Gaming

These Japan-Only Animal Crossing Figurines Are So Darn Cute, Fans Are Struggling To Find Them – Feature 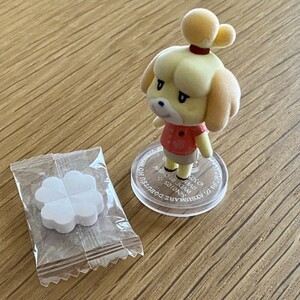 Yeah, you can keep the ramune.

Would-be collectors unable to make the trek to the official store in Shibuya will have to scour the candy aisles of their local convenience stores, however, as the figurines come packed with a single piece of hard candy known generically as ramune.

The line-up consists of Isabelle, Tom Nook, Flick, Flurry, Lolly, Dom, and Marshal. Or, as they’re known to Dōbutsu no Mori fans, Shizue, Tanukichi, Rekkusu, Yukimi, Ramune, Chachamaru, and Jun. Hey, wait a minute. Ramune… as in ramune? We see what you did there, Bandai Candy.

Although just one of several ongoing cross-promotional campaigns featuring Animal Crossing, perhaps only the rerelease of the Sanrio amiibo cards has enjoyed more hype than these figurines in Japan since they were announced late last year. On launch day, fans reported waiting hours in line at Nintendo Tokyo and visiting several 7-Eleven locations with little to no luck.

Word quickly spread that the figurines had already sold out before they even appeared on some store shelves, compelling Bandai Candy to amend the release date at 7-Eleven to the following day and apologize for the inconvenience the staggered rollout caused. Nintendo followed suit, but assumed no responsibility. Many fans have since been rewarded for their persistence, but supplies are evidently dwindling, with one breathless YouTuber claiming in an unboxing video uploaded on April 1 to have finally found three of the seven figurines after visiting no fewer than thirty-five convenience stores.

We’ve currently only got Isabelle and Tom Nook in our collection.

Blissfully unaware of the trials and tribulations of less fortunate fans, this writer strolled half a kilometer down the road to the neighborhood 7-Eleven on launch day and was apparently the first customer to purchase any of the eight boxes available. We picked up Isabelle and Tom Nook, and they’re sitting in front of our dock as adorably as they do behind the counter at Residential Services. The spirit of Joan must have appreciated that Zen-style stone we dedicated to her memory in our island cemetery, or something like that. 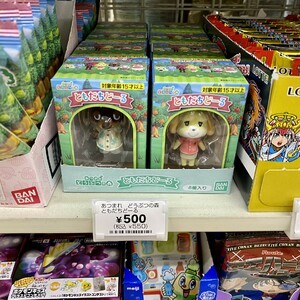 When we opened the two figurines at home, we were immediately struck by their quality. Considering each figurine only retails for ¥550 (currently, £3.59 or $4.97) at convenience stores, the detail is truly impressive. Equally surprising, the packaging prominently features warnings that these figurines are intended for children over the age of fifteen, presumably as an acknowledgement that they were made to be displayed as collectibles and not played with as toys.

Perfect recreations of Nintendo’s in-game 3D models, the figurines are too unstable to stand on their own and come separately with clear plastic stands that either secure them by the tail or between the legs. Unfortunately, Isabelle is a little too short for her included stand, and her weight is entirely supported by her tiny tail. Likewise, Tom Nook is a little too fat for his included stand, which cuts into the delicate texture of his tail. In retrospect, we wish Bandai Candy had opted for a more amiibo-like solution, since we imagine Isabelle will rotate like a windmill with every earthquake. On the other hand, we doubt the Earth could produce a tremor capable of toppling Tom Nook.

These type of figurines are called furokkī ningyō or furokkī dōru (literally, flocky dolls) in reference to their soft, felt-like texture. In a charming attention to detail, the characters’ eyes and clothes are a smooth, hard plastic, unless they wear sweaters like Flurry and Lolly, in which case they’re completely fuzzy. The effect gives a convincing illusion of fur in person, which is a perfect fit for at least six of the seven characters chosen. But it does make the inclusion of the chameleon Flick an even odder choice. K.K. Slider might have been a more natural fit, but we suppose it speaks to the popularity of the new special visitor with younger fans. We should also note that Marshal, the undisputed champion of popularity rankings, is the only villager to reappear from a similar line of twenty collectable Animal Crossing figurines released by a different candy company early last year.

According to Bandy Candy‘s official website, these figurines will enjoy a wider rerelease in late April. Unopened packages from last year’s collection of Animal Crossing figurines currently flip online for three times their SRP, so if you happen to find yourself in Japan this spring, you might consider grabbing every Marshal you can get your hands on. Who knows? He just might be the secret to an early retirement.*

*This does not constitute actual financial advice by the author regarding retirement investments.

Let us know below if you’d be interested in seeing these cute figurines come to the West.