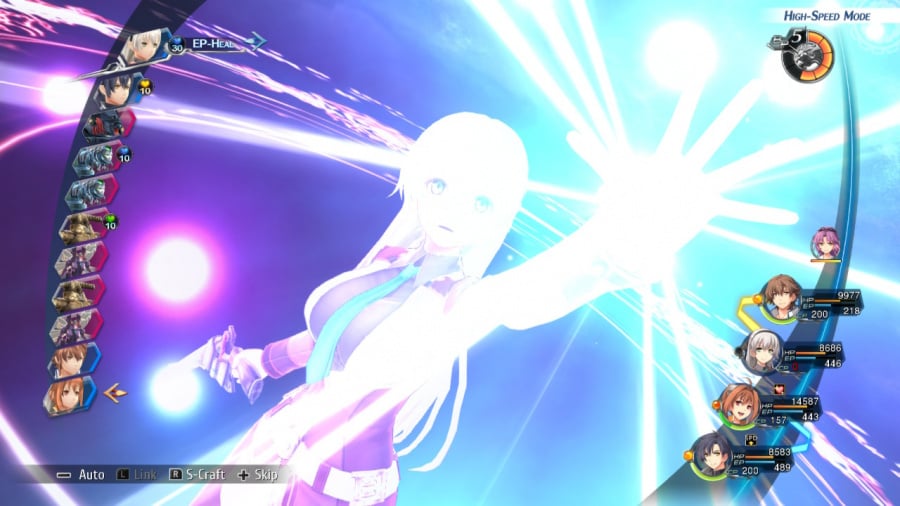 Much like Koei’s Atelier series, Nihon Falcom’s Legend of Heroes games are some of the best RPGs that you’ve never played. Engrossing storytelling is one of the cornerstones of the RPG genre, and no other series exemplifies this as well as the Legend of Heroes. The story began with Dragon Slayer: The Legend of Heroes way back in 1992, and has since been building an all-encompassing fantasy epic that most franchises could only dream of. The latest arc in this universe began in 2015 with the first Trails of Cold Steel, and now the tale of Class VII is receiving its conclusion with Trails of Cold Steel IV. It’s a fitting and satisfying final chapter, though one which feels a little over-indulgent in some respects.

The story picks up about two weeks after the enormous cliffhanger ending of Trails of Cold Steel III, and to be fair, it takes quite a bit of time before it reaches that same level of momentum. There are a few hours here of basically just raw setup, where painstaking effort is put in to ensure the audience is aware of where all the major players are and what their goals will be for the epic adventure to come. It all proves to be worth it over the dozens of hours to follow, but make no mistake, this is a long-winded narrative — perhaps a little too much. Considering all the plot threads left to tie up, it’s easy to see why the developers wanted to take their time to draw out the ending of the arc, but there’s a lingering feeling that some of the subplots could’ve been trimmed a bit to tell an overall tighter narrative. 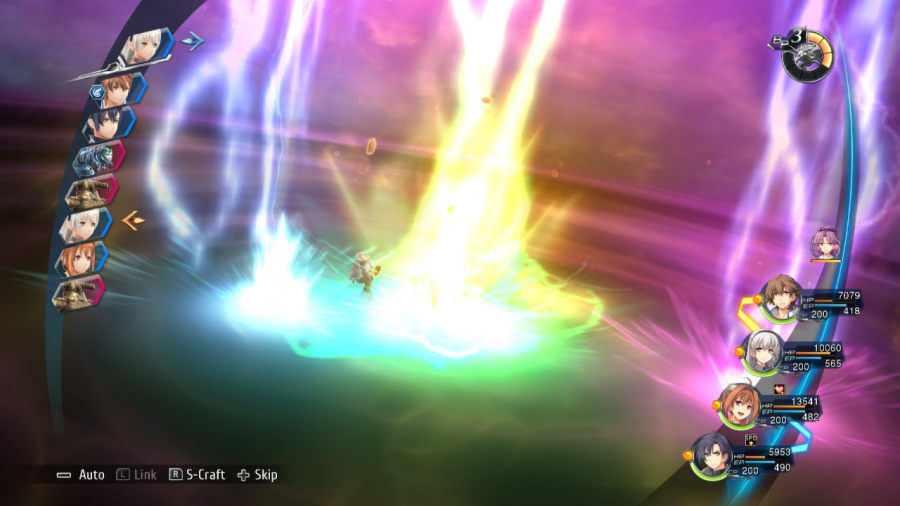 All of this is to say, this is a rare game that we would actively warn you not to play if you aren’t up-to-date on the story so far; bluntly, this is a terrible game for newcomers. Falcom wastes no time in backtracking to explain conflicts or character relationships, which has the reverse effect of making the narrative all but incomprehensible to someone without prior knowledge. You can maybe get a baseline understanding of things if you read through the extensive plot synopsis of previous games on the main menu and watch one (or three…) of those half hour recap videos on YouTube, but even then, you’ll be missing out on the enormous amount of emotional payoff that Trails of Cold Steel IV has to offer.

This is perhaps the most incredible and most damning aspect of Trails of Cold Steel IV: there is only one audience the game is made for. To be a part of that refined group, you must at bare minimum have played through the preceding three Trails of Cold Steel games. To get the most out of it, you need to also have played the five releases preceding that — two of which have yet to receive an official English localization. Altogether, that’s probably anywhere from three-to-seven hundred hours of material to sift through, just to get you primed for this entry. The fact that it all weaves together and builds a coherent narrative makes this easily one of the greatest examples of interconnected worldbuilding you can find in the entire game industry, but the cost of that is that each new entry becomes less approachable to new audiences. 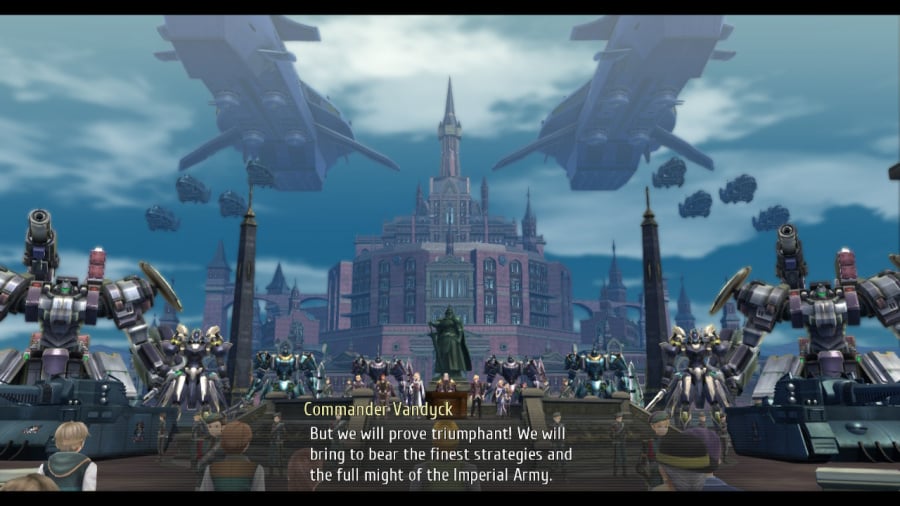 Much like its narrative, the gameplay of Trails of Cold Steel IV builds itself on the foundation of what came before rather than introducing much new. It adheres to a somewhat evolved form of the JRPG structure, where you rinse and repeat through towns and dungeons while collecting new party members and fulfilling quests in each locale. It can feel a little drawn out in places, but the pacing remains mostly engaging and it becomes all the more alluring as you dive deeper into its various systems and come to grips with the different party compositions available to you.

Combat is turn-based, but with plenty of depth to give you more tactical options if you want. Among the actions your party members can take, the most effective are Arts—which act as elemental attacks that have an EP cost to them—and Crafts, which are mostly the same, but draw from a separate pool called CP. On top of this, there’s a Brave gauge that fills over the course of the battle and can be tapped into to trigger Orders that have lasting passive effects for a few turns, or you can instead choose to use some gauge in Link attacks with paired up party members to dish out some serious punishment.

Enemies each have different weaknesses to different elemental and weapon types, and smartly exploiting these weaknesses can result in you pushing them into a Break state. Here, the enemy is unable to act and is fully vulnerable to all attack types, which can lead to extend sequences of melting down health bars and landing tons of painful Link attacks. 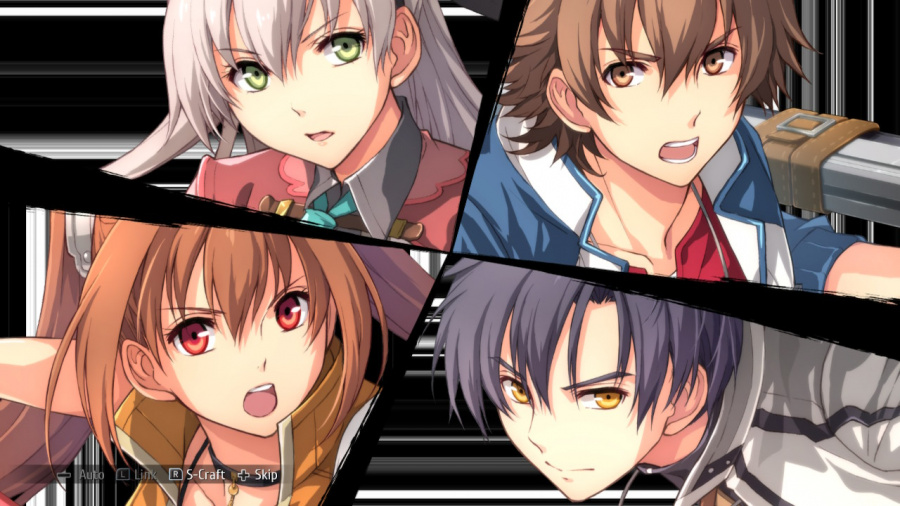 Player and enemy turns are listed on a timeline on the side that dictates turn order, and every action has some effect on the timeline. Most Arts, for example, take some extra time to execute once they’ve been chosen, meaning you have to take the delay into account when choosing that character’s turn. Positioning is also extremely important, as certain attacks will damage anything within a certain zone on the battlefield. It may very well be that a character you need to attack a certain enemy is too far away to land the attack on that enemy that turn, or a group of characters you haven’t properly spread out all get damaged by a wide area of effect attack.

Suffice to say, there is a lot going on in any given battle, and there’s an abundance of information the player needs to take into account when deciding the actions for every character’s turn. It can all feel a little overwhelming at first, but the tutorials do a decent job of explaining the basics to you and the average enemy encounter gives you plenty of room for trial and error as you come to grips with everything.

When you’re not busy battling, there are plenty of additional side activities for you to participate in, too. There’s a card game called Vantage Masters, for example, that introduces a whole Hearthstone-esque side game with its own progression. Then there’s Pom! Pom! Party!, which acts as a Puyo Puyo knockoff that can be massively entertaining in its own right. Modes like these obviously never supplant the main experience and can be mostly ignored if you aren’t interested, but just the fact that well thought out little side games like this simply exist in addition to the huge scope of the main storyline is enormously impressive. 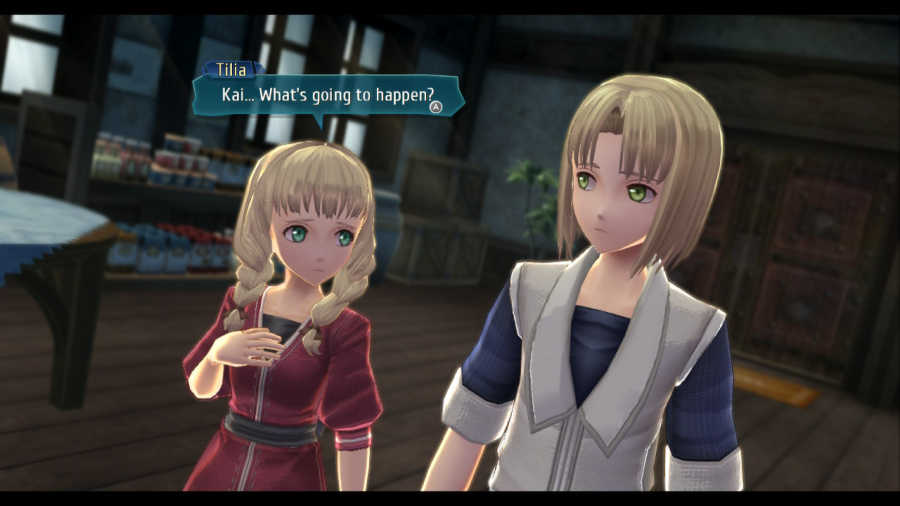 There’s also a Persona-esque friendship system in place to both offer up more character-focused moments and expand a little bit on the combat system. The bond system allows you to build up friendships and even romances between characters, and this is accomplished through completing quests, viewing special cutscenes, and giving gifts. Building relationships then gives those characters more Link EXP, which means that those involved will be more effective and benefit from more buffs and abilities when they’re linked together in battle.

In terms of presentation, Trails of Cold Steel IV is impressive. Environments are cleverly designed and visually appealing, and character models are well-detailed and expressively animated. The real wow factor, however, comes in during battles, where the impressively bombastic Arts and special attacks add all kinds of extra visual flair. These sequences are also where the occasional performance hiccup appears, but such frame drops are rare and seldom affect the experience too harshly.

All this is matched by a comprehensive soundtrack that mixes together plenty of high energy rock with some slower pieces for the quieter moments. Trails of Cold Steel IV doesn’t have the kind of presence that demonstrates the power of the Switch, but it’s tough to be disappointed by the presentational package on offer here.

Trails of Cold Steel IV is the climax that fans of the series deserve, comprehensively delivering on its promise as the end of a saga while setting up future plotlines that are sure to affect the lore in all kinds of fascinating ways. That said, this is also a rather weird game to recommend. Newcomers absolutely should not play this game first, given that it’s a concluding chapter to an ongoing saga years in the making. Longtime fans, on the other hand, don’t need any convincing, as they’re going to get this game if they’ve already invested the hundreds of hours of legwork that set it up. Assuming that’s you, Trails of Cold Steel IV is a spectacular RPG experience that no fan of the genre will want to miss out on, and we can comfortably say that it’s worth your time.