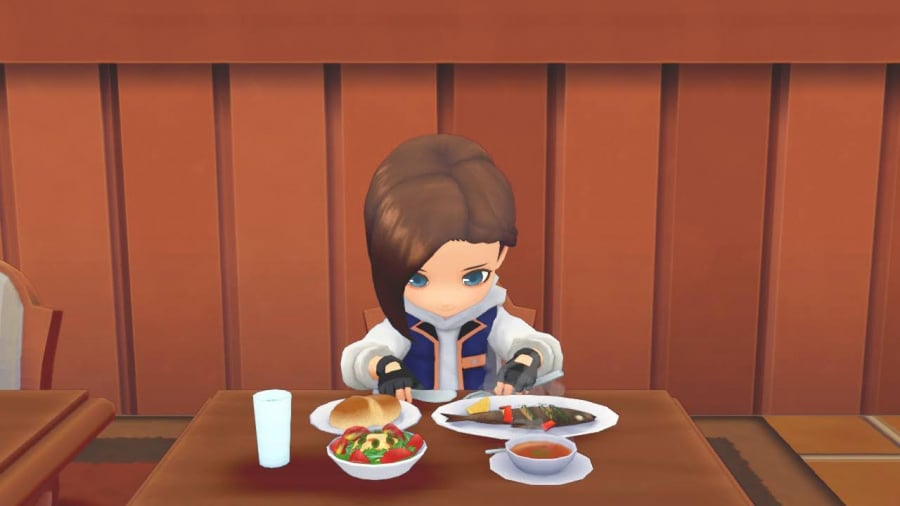 Story of Seasons: Pioneers of Olive Town might not bear the Harvest Moon title that would identify it as a continuation of the beloved series, but that’s all down to copyright, Japanese-to-English translation, and a schism between XSEED and Natsume. It’s not very interesting, so to summarise: Story of Seasons is the original, and Harvest Moon (as it is now) is a cheap pretender to the throne.

But in the past few years, even though the rival Harvest Moon games have decreased rapidly in quality, the Story of Seasons series has floundered all the same – and Stardew Valley came to take its crown. Does Pioneers of Olive Town return triumphant, or does Stardew continue to reign supreme?

As we said in our preview, Pioneers of Olive Town is disappointing in the first season. It’ll take players a long time to warm up to the idea that everything is handled with Makers – the game’s version of processing units, which turn raw materials into usable and saleable items, like wool into yarn, ore into ingots, and wood into lumber. For some reason, those Makers take one item at a time, and so, to make any progress, you’ll need roughly a hundred of them chugging along. It’s almost a full-time job to handle it all. 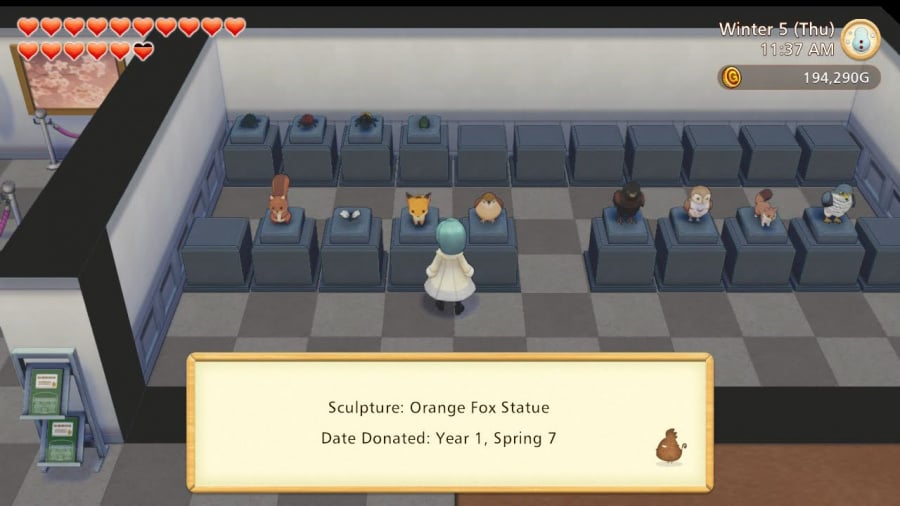 Another huge issue is the lack of personality in the townsfolk. For some reason, they have only the sparsest of dialogue, and even when you’re actually dating them, that doesn’t change too much. Outside of events and working in the various shops, they mostly wander aimlessly around the town, or stand like statues next to their beds, waiting for the day to end.

However. Much like most Story of Seasons games, the world brightens up after the first couple of seasons, and things start to get more interesting. Once you’ve befriended someone up to two hearts, you’ll get some insight into their favourite gifts, which means a fast-track to seeing their “heart events” – the cutscenes that further your friendship. The heart events are short but sweet; we spent the most time with Bridget, so we were treated to a story of her learning to trust other people through animals.

Likewise, the Maker issue doesn’t ever go away, but it does get better. Once you’ve got a decent set-up of all the Makers you need, it’s pretty quick work to fill them all up, and becomes part of the farm routine. Later on, you’ll even unlock Giant Makers, which can process a few items at a time, although they’re expensive to build, so you’ll likely be stuck with the ones you get as rewards for levelling-up your skills. 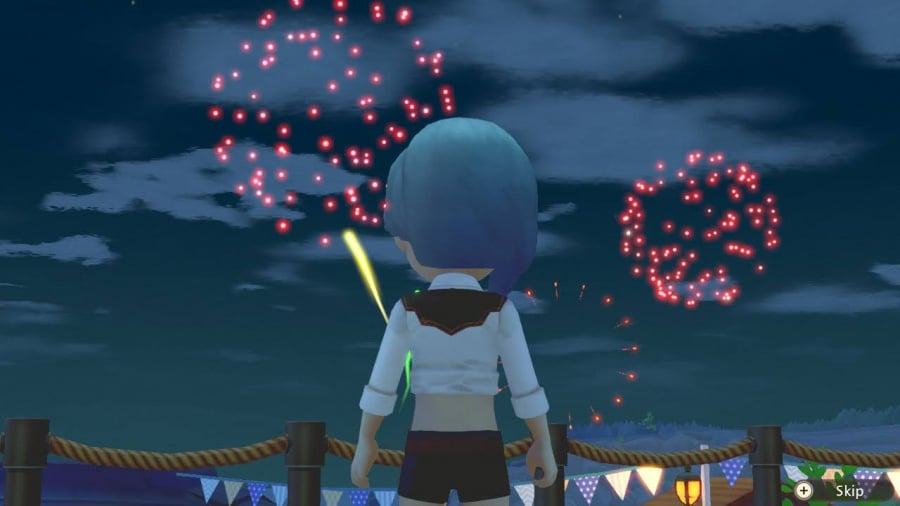 There are 12 skills to level up in total, including fishing, cooking, communication, and mining, all of which cap at level 10. The more you level these up, the better you’ll get at them, and the more materials of a better quality you’ll get as a result. The skill progress is a nice addition, and makes progress pretty steady and satisfying, as long as you’re focusing your attention on multiple skills at once.

There are still a few bottlenecks, like the fact that cooking takes half an hour, even if you’re just making Hot Milk. What’s more, you can only cook one meal at a time – even if you want to just make multiples of the same thing, you can’t – and the Seed Maker, which is the only way to turn high-quality crops into higher-quality seeds, is slow, and can only process one crop at a time.

Mining, farming, fishing, and animal care will take up most of your time while you wait, though, and all of them are as satisfying as you’d hope for, in a game that’s about those things. The animals are extremely cute, if a little… deformed (there’s no way a cow with that big of a face could survive), and it’s easy to unlock new ones, since they appear wild on your farm every season (in the first year, at least) and you can tame them to add them to your collection. 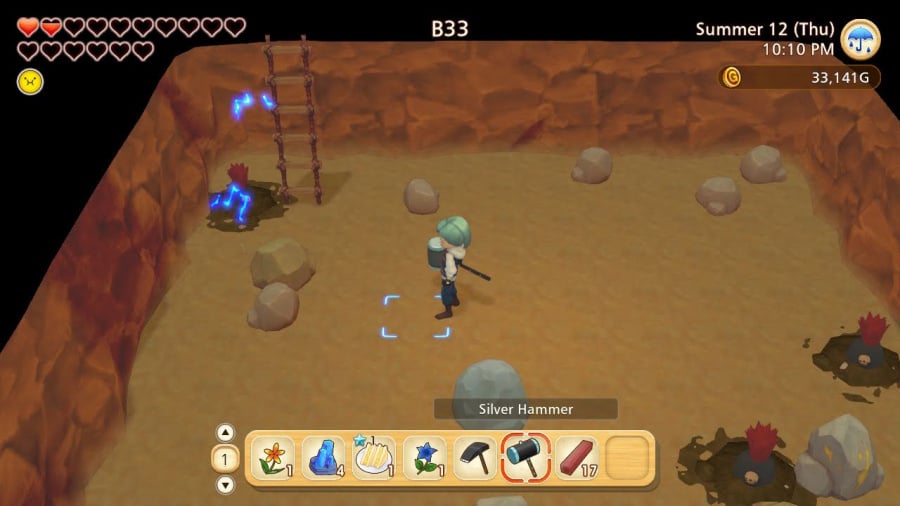 Mining is a test of stamina and occasional mole-battling, and though there aren’t skips to help you to get to lower levels immediately, it’ll eventually take you the best part of a day to get to the bottom of the third mine. Fishing is similar to how Stardew’s system works, and there are bait types and fishing rod upgrades to help you out.

As for what your farmer looks like while they work, the character customisation is pretty good – plenty of outfits, hair changes, even eye colour changes if you want – but the furniture and general house decoration is weirdly limited to a very specific, small area of your house. You can’t change the wallpaper or the floor, either. This area gets bigger as the house upgrades increase the size of the place, but you’ll never be able to place furniture anywhere you want, sadly.

One of the biggest caveats of all this is that the farming absolutely tanks the framerate. This is an issue that the developers know about, and are working on, but running through ploughed-and-planted fields, or even empty ones, will reduce the framerate to about 5 frames per second. Add this to the weirdly long loading screens, and you’ll be wondering what’s going on behind the scenes. We actually had one loading screen that was still going after three minutes, and had to restart the game, but that was a one-off – all other loading screens were sub-ten seconds. Still, that’s a long wait. 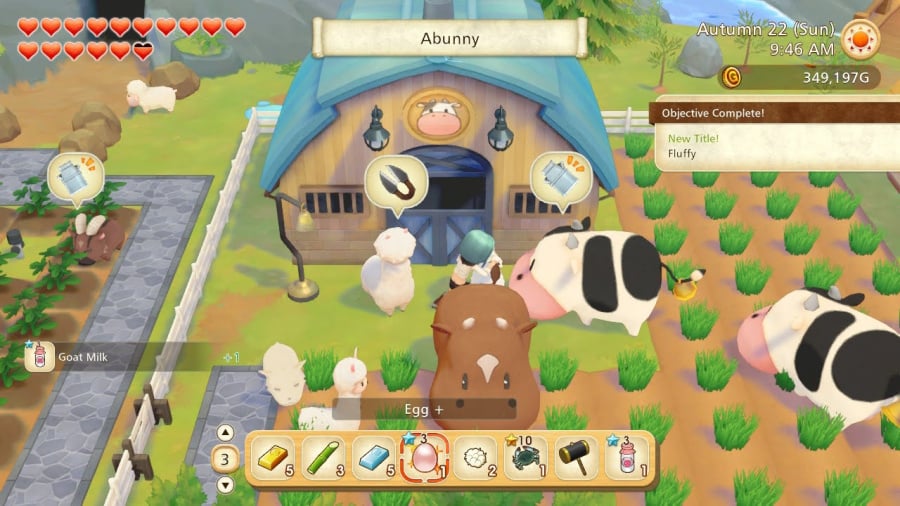 New features, like the Photo Mode and the Museum, are fun to play around with – but the Camera only holds ten photos, and you can’t really do anything with them besides donating photos of animals to the Museum. You can’t even full-screen them to save them as screenshots.

The Museum is perhaps the most disappointing of all. Taking clear inspiration from Animal Crossing, but with a fraction of the budget, Story of Seasons’ offering is just not good. The fish exhibit is a bunch of fish-shaped shadows. The treasure exhibit is a bunch of pillars topped with similar-looking rocks. The animal exhibit is a bunch of animal statues on pillars. Examining these pillars gives you no extra information beyond the name of the thing and when it was donated. If we’d paid to go to this museum, we’d ask for a refund.

Pioneers of Olive Town’s story is all about bringing tourists to the town – and you’ll see them flocking in on the ferry, with randomised appearances, but the same name, “Tourist”, each time. Sadly, they don’t do much beyond that. Your donations of materials and money won’t really change the town in any meaningful way beyond a few cosmetic changes, and the townsfolk thanking you. The tourists don’t go to the restaurants, they don’t enter the shops, they just mill about at the port. It’s a shame, because seeing the effect of tourism on this struggling town would have been really interesting. 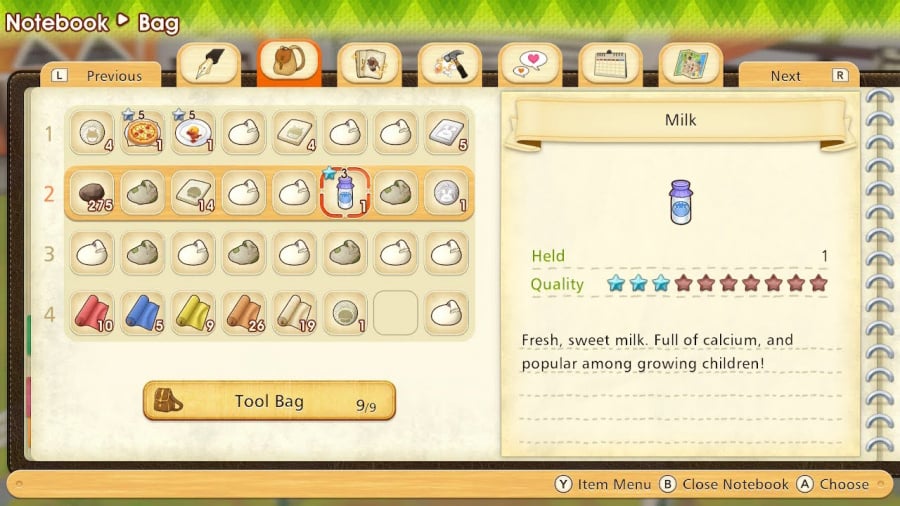 In summary, all the issues that we mentioned in the preview are still there, plus a few more that we found by playing through a whole year. Some of those issues won’t be too bad once you get into the rhythm of things, and it’s certainly a mile better than Harvest Moon: One World, but it’s by no means the best Story of Seasons game you can get. However, fans of the genre will find that they settle quite nicely into Pioneers of Olive Town, even as they’re disappointed by the things it lacks. It’s a solid, if relatively unremarkable entry into the series, but in our opinion, you’d be best off waiting for a sale and a bunch of patches, and getting Friends of Mineral Town in the meantime.

Random: New Study Uncovers The Most Popular Pokémon By Country