Home » Gaming » Soapbox: The Nintendo Switch Was My Companion As I Travelled The World
Gaming

Soapbox: The Nintendo Switch Was My Companion As I Travelled The World


When the Nintendo Switch came out in early 2017, I was adrift. I had moved out of London, I had gone freelance a few months before, and I was what people at the time called a “digital nomad” – someone who travels around with a laptop, working wherever they can find a plug socket. I slept on my friends’ sofas, worked from cafés, and travelled from Paris, to Berlin, to San Francisco, following old friends and making new ones along the way.

It was the kind of wild, crazy, stupid thing you can only really do in your 20s, and I’m glad I did it – but there were times when I felt lonely and lost, too. In that time, I had no greater companion than my Switch, which stayed by my side (and in my bag) through it all – and has the battle scars to prove it. Honestly, my 2017 was a bit like an advert for the Switch, as I played it pretty much anywhere but home – because I didn’t have one – but I could slot it into any dock that I came across in my travels, sharing my games and experiences with friends from across the globe.

Digital nomadic life is alternately incredible and strange. When you don’t have a place to call home, there’s no place of rest, recuperation, and that feeling of safety. You’re pretty much always running on adrenaline, and you’ll wake up with an aching back from all the sofa-sleeping. My motto was “as long as I have my bag, I can go anywhere” – my bag held a laptop, my wallet, my passport and, of course, my Switch. I held onto that bag as my one lifeline, the thing that unlocked the world back when plane travel was still a thing.

Through it all, my Nintendo Switch – a bit of a reckless purchase when I had to buy cheap overnight flights and hostel beds in order to keep going – nestled in my backpack, a window to another world. I had Breath of the Wild with me, Link’s ruined Hyrule accompanying me on nights when I’d wonder if I should just pack it all in and rent a flat again. There was a time when my Switch had been charged more in airports than it had at home.

The console came out while I was in San Francisco for the Game Developers Conference – the furthest I’d ever been from home, and the place where I met most of the friends I have today – and pretty much everyone there spent that historic Friday queueing at the nearest Best Buy. I didn’t have the funds back then, having just, you know, bought a plane ticket to San Francisco – the most expensive thing I’ve ever bought to this day, other than rent – but I remember sitting in the chilly West Coast sun and watching my friends experience Breath of the Wild for the first time. It was a magical moment, even just being on the periphery, because it was so easy to share – we weren’t tied to a single place.

Even so, we would congregate in hostel common rooms to hook the Switch up to the TV – and there, in all its wonder and glory, was that iconic reveal when Link steps out of the cave. For the first time in probably all our gaming history combined, we were having that moment collectively, united by our love of games, sitting cross-legged on the well-worn carpet of a tiny, dimly-lit hostel, on the fringes of San Francisco. I don’t think anything will ever beat that moment for me.

When I finally moved to Canada and settled down, I had almost nothing – no furniture, no bed, no TV. I spent my first night in my new Montreal apartment sleeping on an uncomfortable armchair that I had bought off Facebook Marketplace for $60, with the freezing mid-December Canadian winter kept at bay by having a coat as a blanket. Folks, it was not great! But the plug sockets worked, and I still had my bag – so I wasn’t alone. I had Super Mario Odyssey to while away the winter.

A few months later, I was once again travelling to the 2018 edition of GDC – this time on a California Zephyr Amtrak train from Chicago to San Francisco, as part of a three-day game jam called Train Jam, run by Adriel Wallick (who recently joined the Among Us team as their new programmer). By that time, pretty much every one of the 300+ game developers on the train had a Switch, and we all spent long hours in the observation car, playing Skyrim while the snow-topped mountains of Colorado and wide open mesas of Utah rolled past. The symmetry was not lost on me – the views from Train Jam are some of my favourite views in the world, and Skyrim’s mountainous aesthetic echo made it all the more special.

Taken shortly before getting attacked by several witches. They were not interested in the moon. #skyrim pic.twitter.com/LL5IfvGnsV— Kate Gray (@hownottodraw) November 27, 2017

Of course, we all experienced the power of the Switch in early 2020, when the beginning of the pandemic coincided with the release of Animal Crossing: New Horizons. What serendipity: it was such a perfect game for the start of a new way of life that it quickly turned into a zeitgeist culture snapshot. Enough has been said on this site about the inadvertent virality and comfort of Animal Crossing last year, from Madeline Thompson’s story of how it brought her closer to her dad, to my own admission that I sort of accidentally made it into a spectre of my own misery – so I’ll leave it there.

Eventually, I moved in with my partner, thanks to the pandemic, and our separate households became one. We put one of our two Nintendo Switch docks in storage, and put all our grey Joy-Cons in a pile as step-siblings – what’s mine is yours, and that includes Joy-Con drift. We spend nights in bed, either me watching him play through the Ace Attorney Trilogy for the first time (and trying not to spoil it), or him watching me play A Link to the Past and encouraging me through all the tough bits. Some nights we cuddle up on the sofa and play games together, like Haven‘s co-op mode, or inviting friends over for another one of our Puyo Puyo Tetris battles – something we haven’t done since the pandemic, of course, but one of the activities we used to do back when he had housemates. 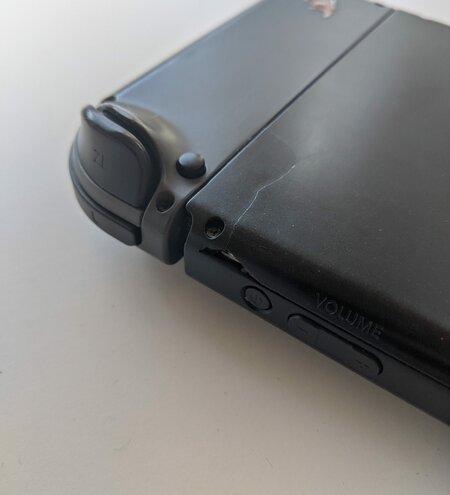 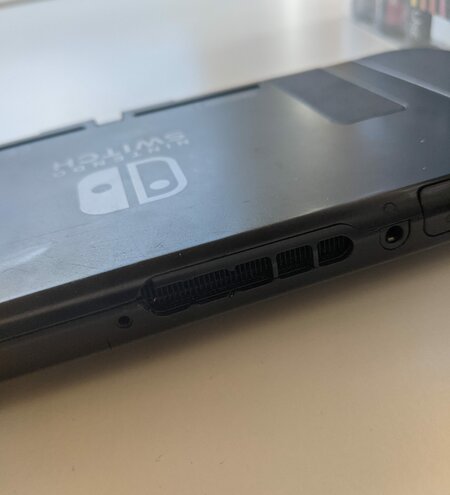 It’s not as bad as it looks! I promise!

Unsurprisingly, my Nintendo Switch didn’t do too well with all the travelling, and it’s honestly a miracle that it’s still going, four years later. The screen has some light scratching – I don’t always notice it, to be honest – and the Joy-Cons have little nibbles on the thumbsticks where friends’ curious cats checked to see if they were edible. The grill at the back has almost all of its inner struts missing, and there’s a pretty sizeable crack on the back, with a big chip of the plastic missing. My Switch has been through a lot, and though I’m tempted to upgrade, I just can’t bring myself to retire this old thing. I even bought a new Switch at one point, mostly because it came with a bunch of points for my supermarket loyalty card, before selling it again. I know. I’m awful.

Now, I know that this story probably makes me sound like the kind of reckless rich kid who travels the world because they have too much money, and doesn’t take care of their expensive property, but I assure you – my year of wandering life was not glamorous. I spent a full two months on a friend’s sofa at one point, spending hours each evening playing through Disgaea 5 and Dragon Quest Builders with them, sitting on the same seat that I would later make my bed, and paying my way by cooking for them.

I decided to do my year of roaming because London rent was insanely expensive, and what I would be paying for a cupboard-sized bedroom in a flat with an endlessly rotating cast of sometimes loud, messy, or strange people could easily afford me a life on the road, with a few lifestyle changes. I consider myself not only lucky to have so many accommodating, generous friends who would let me take up space in their lives for a little while, but to have also had this incredible, portable, surprisingly indestructible console in my pocket the whole time.

I can’t believe it’s been only four years with this lovely rectangle, and I can’t believe all we’ve been through together. It’s been a crazy ride, and we both have the scars to show for it, for better and for worse – but I wouldn’t change a thing.

Minute Of Islands, The Adventure Time-Like Adventure Game, Gets Delayed