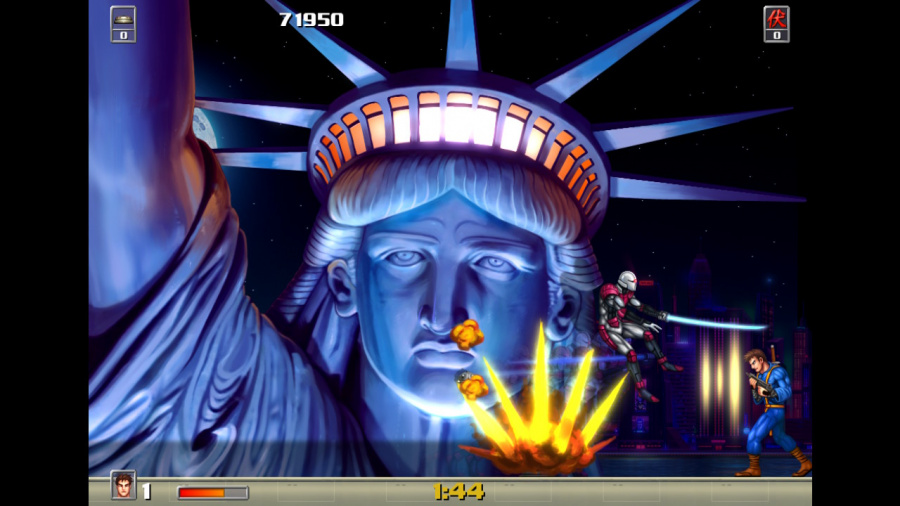 We’ve played a lot of tough games here at Nintendo Life. We’re no strangers to the Game Over screen, but equally, we never gave up. You could say we’ve been around the block. We’ve knocked out Mr Dream. We’ve cleared Smash Bros. Ultimate at 9.9 intensity. There’s very little we baulk at. But we’re not ashamed to admit that Shadow Gangs got switched down to the easier “Rising Ninja” mode after a good few hours spent on the first mission.

Yep, from the first area of the first mission, we were getting our butt handed to us, with trickily-placed enemies designed to catch out the careless player, not to mention the psychological factor of the constantly ticking clock. It’s a game that encourages you to move fast, then puts hazards in your way to catch you out when you do. That sounds like a criticism, but it’s actually fun to see something so avowedly tricky; a game where the opposition genuinely wants you to lose. 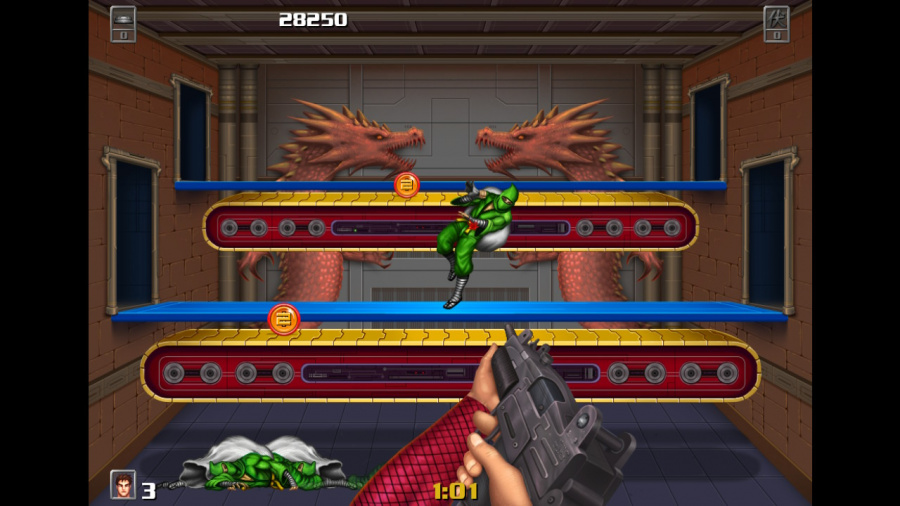 It helps that Shadow Gangs is, well Shinobi. It’s not like Shinobi; it might as well be Shinobi for how closely it adheres to the design template and playstyle of Sega’s arcade masterpiece. It looks like Shinobi, too, and even utilises similar bonus stages. None of this is a bad thing, as we’ve inferred, because Shinobi is great (and we’re going to stop saying Shinobi now, we promise).

The side-scrolling levels operate in a vaguely wide-linear fashion, with areas extending beneath the ground as well as rooftops or branches to hop up to in search of captured ninja hostages. As in Shi – erm, a certain Sega game, you’ve got to rescue every hostage in order to move on to the next area. They’re well-guarded, but your infinite flurry of shurikens and brutal melee attacks should, in theory, see you through. In theory.

It’s not that Shadow Gangs is poorly designed by any means, it’s just that we found certain traps to be, well, infuriating. The gunmen at the end of the narrow tunnels in the first stage got us almost every time, and the battle of attrition that is the first boss saw us run out of lives on numerous occasions. Switching the difficulty down doesn’t actually make things all that much easier, but it removes some of the cruellest enemy placements in a way we feel actively improves the game. 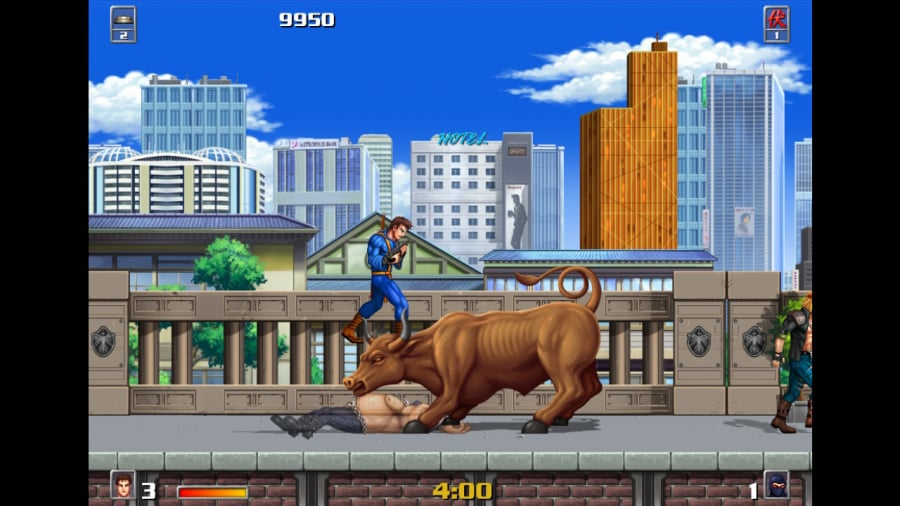 Treat “Rising Ninja” as the default difficulty, perhaps, and save the others for subsequent playthroughs. At this high-but-fair level of difficulty, it’s actively very enjoyable to play, and while the action never really deviates from its source material, that’s hardly a bad thing. If you’re going to bite someone’s style, you might as well bite the best.

There are multiple stages to each mission and the game doesn’t seem to save between them, requiring the boss to fall before you can quit without restarting a few levels back. We have mixed feelings on this – for one, we don’t mind an old-school challenge, but it would be nice to know we could dip in and out of Shadow Gangs. Naturally, you can pop your Switch into sleep mode, but we still feel as though it’s a bit of a bridge too far, considering. Then again, it wouldn’t make a lot of sense in a game with limited lives and credits if you were reloading a mid-stage save with next to nothing. Missions are selectable from the main menu once the boss is beaten, which is a nice concession to modernity but still not enough for some players. 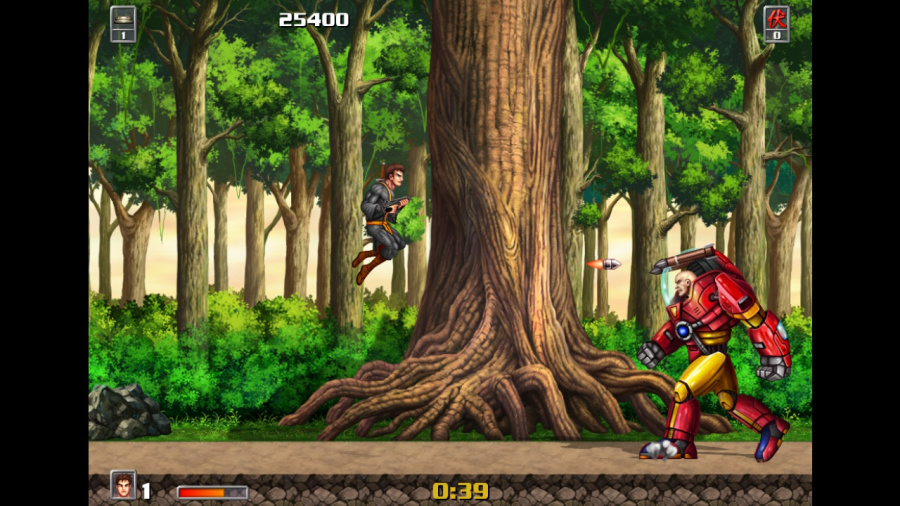 The aesthetics of Shadow Gangs are definitely worth talking about, because this one strange game. The sprite work is inarguably strong, but the style of it seems a little bit all over the place. Cutscenes are grammatically odd, with voiceover work that’s actively humorous in how casual it is compared to the stakes at hand. The game’s music is catchy, but there’s an oddly MIDI-ish quality to it that makes the game feel dated. And yes, it’s a throwback, but it’s difficult to know to what, exactly. It feels confused but overall is quite charming.

It helps that it’s a pretty good game, because these strange visuals combined with a stinker would make for an all-timer of a kusoge. It reminds us a little of bootleg games, or weird DOS titles you’d play on BBS’ or CD-ROMs full of demos then never, ever see again. It recalls a very particular feel that’s difficult to describe to anyone who hasn’t played it. The major villain is a giant, evil Freddie Mercury. You need to check this out, believe us.

An odd duck and no mistake, Shadow Gangs is nonetheless an enjoyable Shinobi clone with plenty of level design polish. It’s let down by an obnoxiously high difficulty level and some fairly stingy game-saves, but overall has a good amount to recommend it if you’re done with the Sega Mega Drive Classics and Sega Ages Shinobi. It’s an extremely valiant effort at a truly old-school feel and retro gamers definitely won’t regret checking it out – just be prepared to swallow your pride and head for the options menu.

Talking Point: What Are You Playing This Weekend? (January 30th)