It’s now been twenty-five years since S.T.A.R.S. members Jill Valentine and Chris Redfield first burst through the front doors of the Spencer Mansion and found themselves standing in one of gaming’s most iconic opening areas. Resident Evil’s fixed camera angles revealed the full scale of that grand hall, as well as the undead horrors lurking in the rooms nearby at its own tempered pace, every view designed to show not quite enough of whatever could be heard lurching around the corner.

It was a game of contradictions; as much a thoughtful adventure peppered with ornate locks and obtuse clues (often the exclusive realm of mouse-wielding PC owners at the time) as it was a do-or-die fight for survival against biological abominations so shockingly grotesque the game attracted a legally binding ’15’ rating from the BBFC on its UK release, back then a classification usually reserved for swear-y gun-heavy action movies. The slight differences between the playable duo’s stamina and inventory space made picking between the two of them feel like a choice between hard and harder, while scavenging for herbs and ammunition forced those brave enough to tread the mansion’s abandoned corridors to question every action, uncomfortably aware that every item used now would be one less to fall back on later.

It shouldn’t have worked — not really. Adventure aficionados weren’t supposed to enjoy learning how to use the nerve-wracking shotgun-under-the-zombie-chin technique to save precious ammo, and likewise those who relished toasting giant spiders with flamethrowers weren’t expected to seriously care about lengthy diary entries recounting one poor worker’s descent into itchy (and tasty) cannibalism, or have the patience to find the right crank for the right hole.

But they did, and to an almost unimaginable level: Resident Evil — as a game, as a series — became nothing less than a cultural phenomenon; its critical and commercial success as unlikely on paper as it was well deserved in practice. This first game in particular left such a deep impression on the genre, every single survivor of “The Mansion Incident” has gone on to star in at least one other entry in the series over the years, and — SPOILERS! — gaming’s most famous traitor, Albert Wesker, never quite dies definitively enough to entirely rule out a “surprise” series comeback or a welcome non-canonical guest slot in an unrelated game. 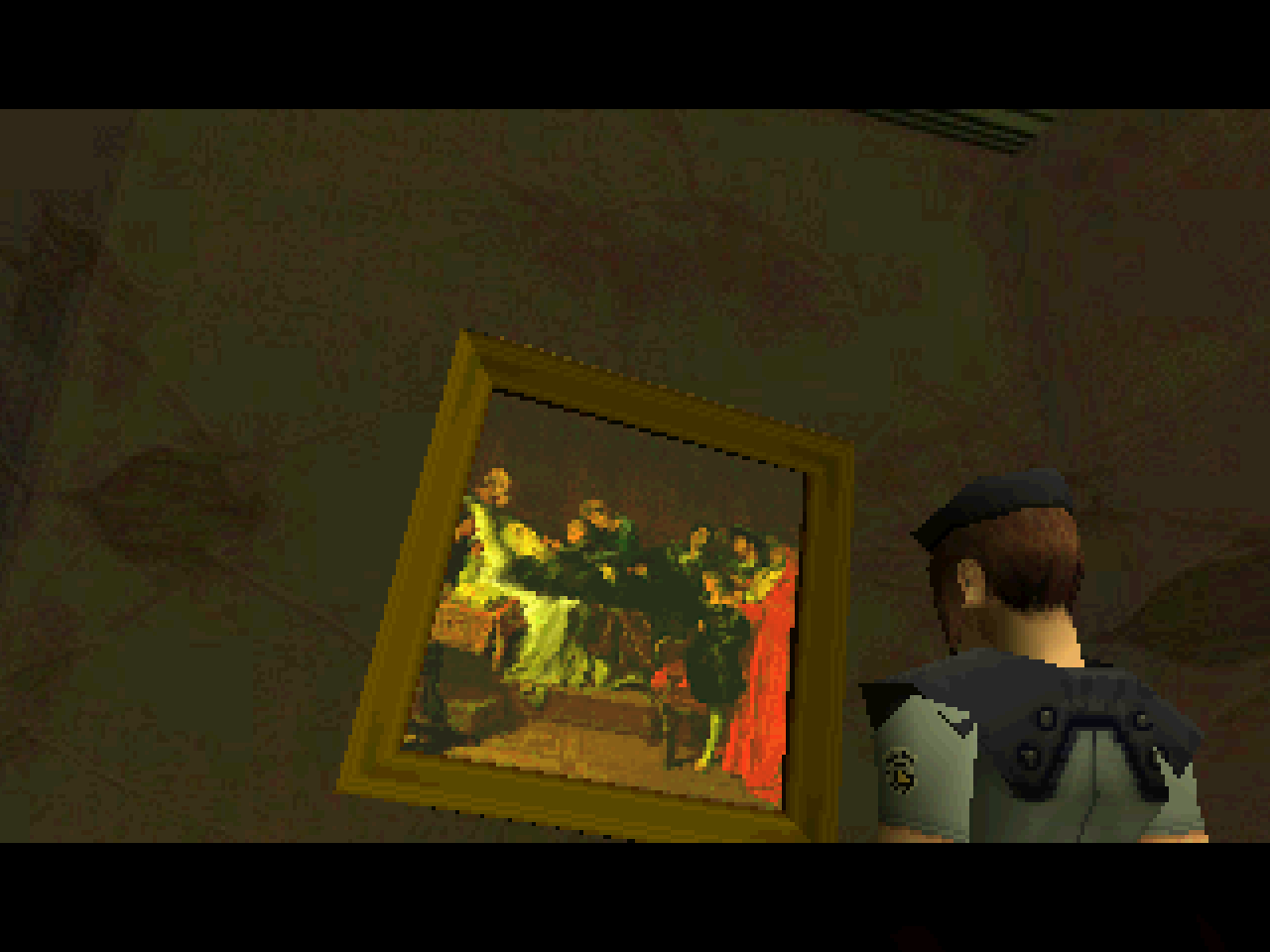 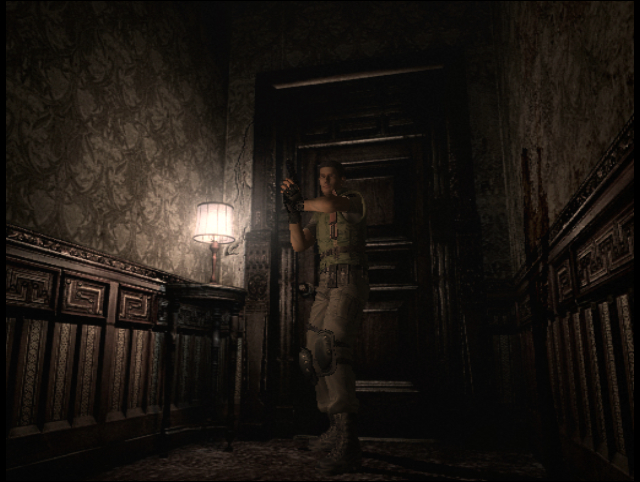 All this success meant it was no great shock when six years to the very day after Resident Evil’s PlayStation debut a remake of the genre-defining title appeared in Japan, exclusively for Nintendo’s GameCube. Resident Evil (or REmake colloquially) retained the same polygonal characters/pre-rendered background combination of the original rather than making the jump to full 3D (as Code: Veronica did), the GameCube’s power used instead to increase the detail on each character to an incredible degree: their animated faces now looked much more realistic and their clothing so attentively crafted it was possible to see the individual designs of the personalised S.T.A.R.S. wrist watches worn by the main cast (real-world replicas were briefly sold for a high price and are now worth even more).

But what made even more of an impact than individual fingers and glass-eyed gore was the masterful art direction, skilfully obscuring this next generation of death and decay in thick black shadows held at bay by nothing more than the muted glow of an ornamental lamp or a almost-forgotten candelabra. The mansion is a place of corrupted splendour where abandoned experiments run wild and once luxurious rooms are now decorated with slumped bodies and upended furniture.

A shiny new coat of graphical lushness wasn’t the only new feature Nintendo’s hardware brought to the PlayStation classic: the new mansion redesign vastly improves some of the weaker areas in the older release (compare zombie shark Neptune’s infamously unthreatening performance in its old flooded box room against the electrifying encounter in the all-new Aqua Ring) and simplifies a few common sticking points (basing the painting puzzle around matching colours makes it much easier to solve correctly first time). Several pulse-pounding new twists were also added to the monsters roaming within: every motionless zombie corpse is now a dreaded Crimson Head in waiting, unless players decide to spend precious time and inventory space burning their bodies; every Hunter more deadly and persistent than they were before. The remake also expanded the surprise scene from the old “Director’s Cut” — where Bravo Team’s Forest Speyer, pecked to death by crows before Alpha’s arrival, zombily got up and chased players out of the room — into a whole New Game+ feature, the unmistakable clanking of his bandolier of instant-death grenades a warning he’s shambling around somewhere nearby.

The remake wants all of its players pay attention, to expect nothing but than the unexpected… Players may remember Resident Evil, but Resident Evil remembers them too

Even more terrifying than being chased by an insatiable and invincible ex-colleague zombie are the melancholy encounters with Lisa Trevor, the long-tortured child wearing the saggy remains of multiple torn-off faces over her own mutated visage. These new encounters help to make an already intimidating title even more dangerous than it was before and would have been more than enough to guarantee the game an all-time classic, but what elevates it beyond that and into the realm of legend is how well this GameCube version remakes the player’s experience as well, deliberately using old PlayStation solutions and hazy memories to misdirect and entrap anyone expecting the same game with a fresh coat of paint and a few new cutscenes.

Players of the CD-bound Resident Evil (or the rather good DS port, Resident Evil: Deadly Silence) may have vague recollections of needing four crests to leave the mansion and access the garden and guard house beyond, and are likely to make finding these items a priority. The remake still has these crests, but the door they once opened requires only one item — an item only obtained after collecting four masks. This red herring leaves seasoned fans of the earlier work just as alone in the dark as someone trying out the series for the first time but crucially it isn’t a waste of an experienced player’s time or a cruel joke at their expense: the new reward for gathering all four crests is access to the magnum, the most powerful weapon in the game outside of the unlockable infinite rocket launcher. The remake wants all of its players pay attention, to expect nothing but than the unexpected, and this is why previously easily-ignored rooms and the bonus items within are now vital to progress — why the rotting dogs that once memorably crashed through corridor windows now only ominously crack the glass if the area is approached from the main hall. Players may remember Resident Evil, but Resident Evil remembers them too. 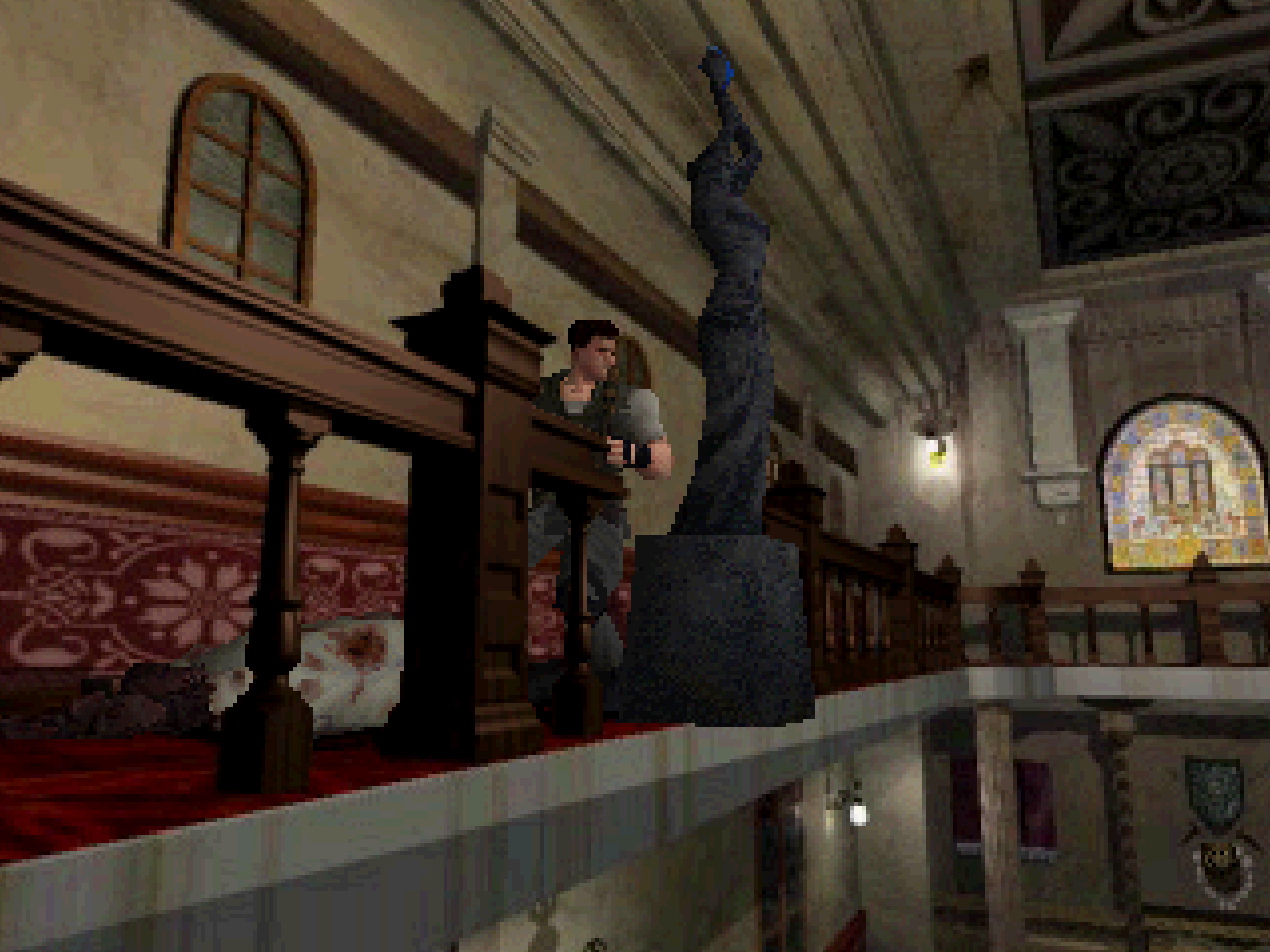 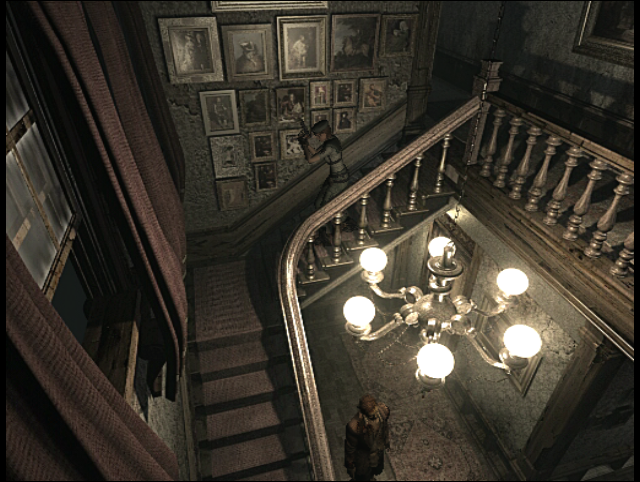 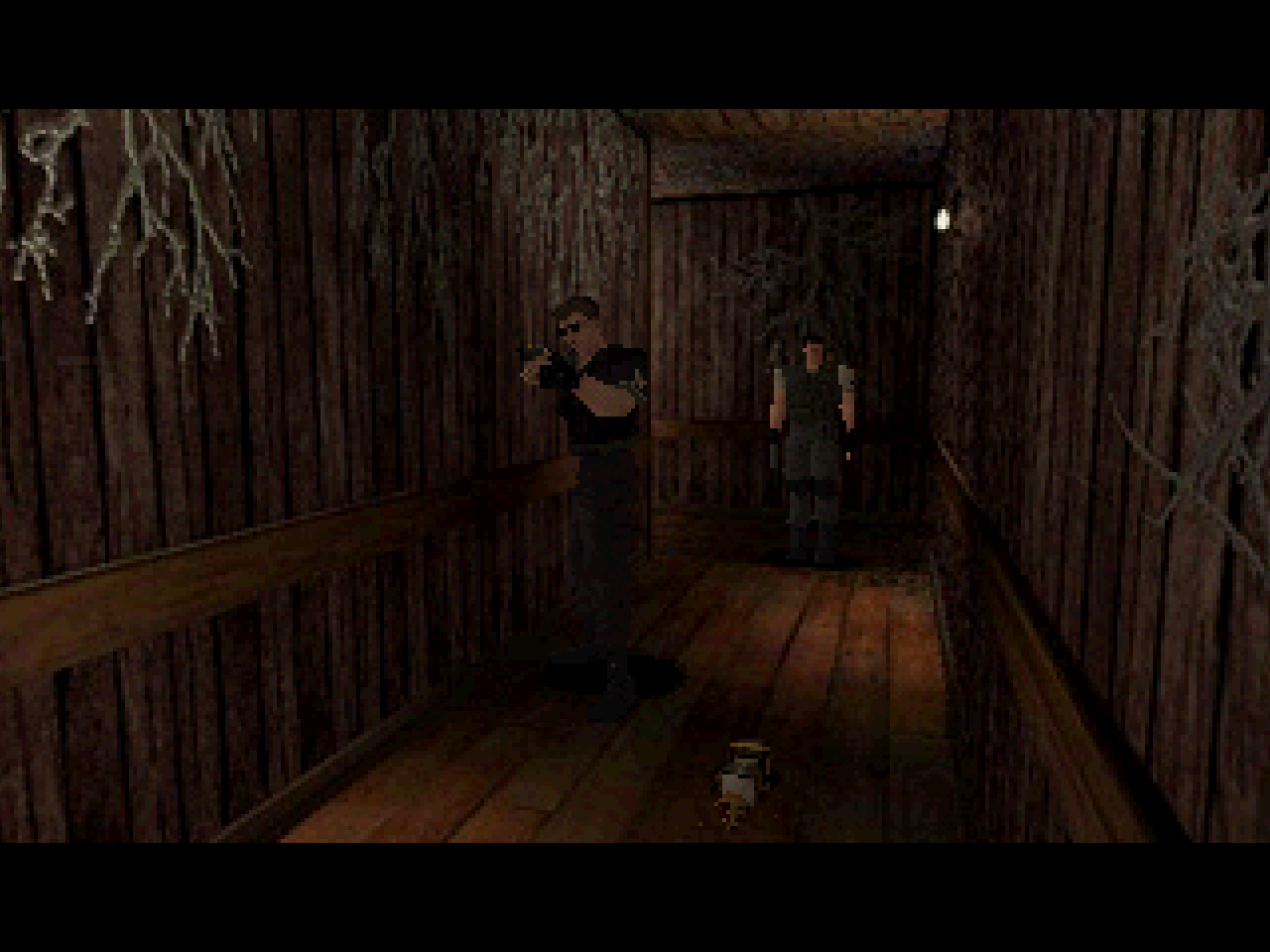 As keen as it may be to keep old fans on their toes, the game’s never afraid of acknowledging and keeping everything that worked so very well (or is at least so fondly remembered) in the original either: that Jill-sandwiching shotgun trap can still play out exactly as it did before, Barry’s rescue and all; passage through the caves is once again hampered by the enormous door-spanning webs of the Black Tiger, just waiting for a brave player to slash or blast them away before the giant arachnid comes close enough to cause serious damage; the secret laboratory under the fountain is still crawling with the gruesome forms of those insectoid Chimeras and stuffed with file upon file of terrible secrets; and Albert Wesker is still the greatest antagonist to ever gloat at length while wearing sunglasses in the middle of the night.

For all their diversions from each other, the general themes and design philosophies that bind these two interpretations of S.T.A.R.S. destruction are unshakeable, identical, and obvious: Survival, and Horror. Capcom excelled at using both those elements to create tension so palpable there are moments where players find themselves pointing their guns into the unknown with their backs against a door, hoping whatever they can hear groaning nearby hasn’t noticed them. Both turn feeling vulnerable into an artform, forcing difficult decisions — decision about carrying keys for undiscovered doors, about whether heading back for that one box of shotgun shells is worth the risk, about how very long it’s been since the last typewriter — over and over again. Both see the gut-wrenching anxiety of all the above eventually fade away only to reveal the beautifully designed speedrun-able puzzle underneath; daring the newly-fearless to cut corners, carry less, leave those life-saving herbs behind and dash straight past time-sucking save rooms, always chasing after a quicker clear time than the last.

It’s these differences and similarities that keep both versions of Resident Evil feeling as raw and frightening as the day they were made all these decades later; both distinct enough to be worthy purchases in their own right, both still capable of surprising and challenging even their biggest, oldest fans. The world of survival horror may be littered with the undead, but this origin story still feels full of life.

Monster Harvest, A Pokémon-Meets-Stardew Valley Game, Is Ploughing Its Way Toward Switch