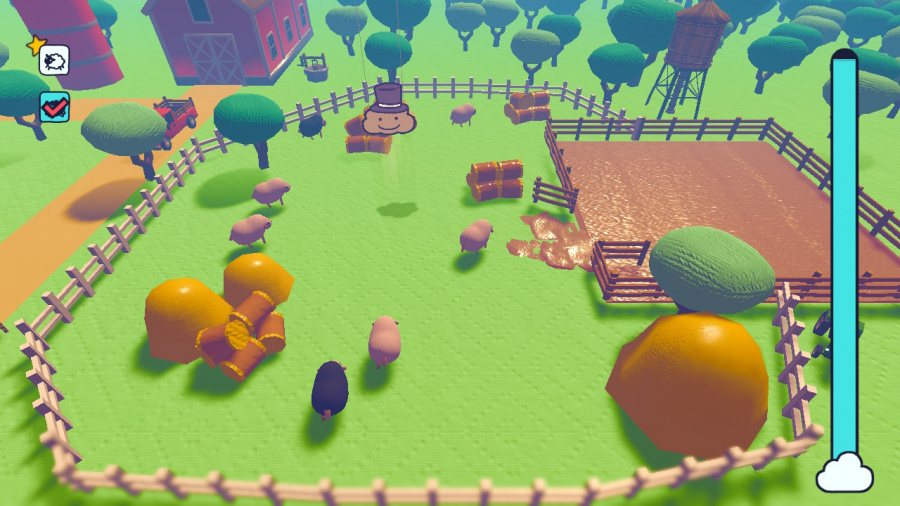 Rain On Your Parade wants very much to be the next Untitled Goose Game. It so desperately needs to be that quirky breakout hit, the virtual talk of the water cooler, the “have you seen that cloud game?” game, spawn of a trillion thinkpieces.

So, yes, a good idea, in theory. Our problem is that we found it all came across as rather uninspired in its execution and occasionally downright irritating in its presentation. Mostly, it’s just a little bit boring, in much the same manner as a wet weekend. Perhaps that’s intentional.

Moving with the analogue stick, you press and hold ‘A’ to rain. There’s a water metre on the right of the screen that empties as you do the same, but it can be refilled (on certain levels) by hovering over a source of moisture (usually water, but you’re also able to rain poison, oil and other substances). Later, you’re also able to create a tornado, blanket the world in snow and unleash lightning strikes. Despite these, there’s never a whole lot to it and we got the impression that the aesthetics and humorous writing are intended to fill in the blanks. They don’t. In fact, we found the tone and writing of the thing a little bit… what is it the kids say now? Oh, yes – cringe. It’s all very twee and affected in a wearyingly familiar sort of way. 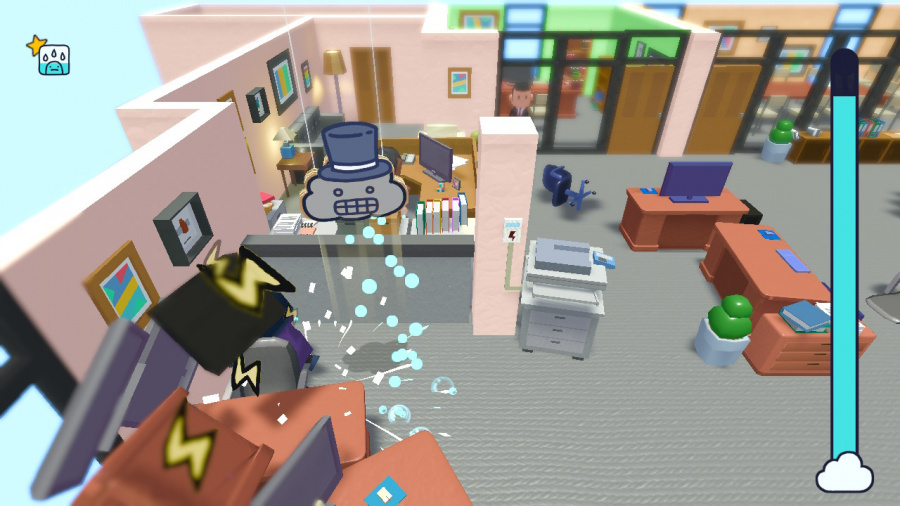 However, despite the whole thing feeling a touch lacking, Rain On Your Parade absolutely isn’t without merit. As the game rolls on (like, well, a cloud), your objectives get a fair bit more diverse and require at least a little puzzle-solving and exploration; a school-based level is an early highlight, seeing you undertake multiple disparate objectives as a pleasant preview of the more complex demands to come. There’s also something to be said for the game’s unpredictability; you won’t know where you’re going or what you’ll be asked to do next, and some of the diversions are good for a smile – there’s a full-level homage to a popular stealth series that was enjoyably out-there, and despite a few other whole-level references to other games (Katamari Damacy, etc), Rain On Your Parade feels very much its own thing.

It’s nice, and a bit of a reversal of the usual outcome, to find a game with such an inauspicious start turn into something better. It’s far from perfect – and, to be frank, only just scrapes “good” – but the aforementioned variety does go some way towards making even the dull-as-rainwater early stages more palatable; they may be a bit rubbish, but you’ll be playing them for about a minute apiece, tops. Just like the weather, this one keeps changing.

The quickfire variety does the game a lot of favours, but you’ll smirk and snort with recognition at a Resident Evil reference or momentary flash of invention, rather than laugh out loud at the carnage as per the likes of Untitled Goose Game. Barring a couple of minor difficulty spikes, the whole thing will last you three hours at most, not counting the pretty decent post-game content – new challenges on existing stages and a brand new mode that changes things up in a vaguely interesting way. 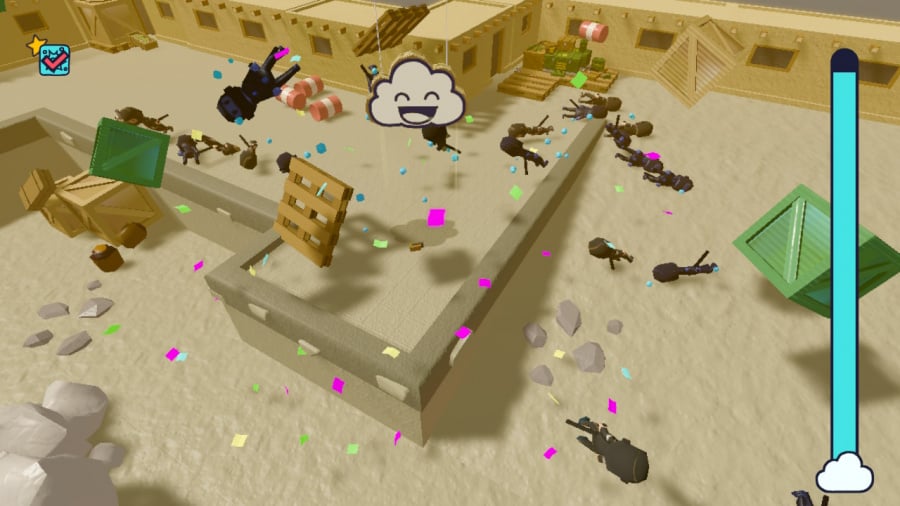 Visually it’s all quite slick, with an interesting cardboard aesthetic and a generally smooth framerate – things struggle just a touch on the larger stages, but it’s nothing to kick up a fuss about. We weren’t particularly impressed with the sound design – the sound of rain hitting a surface is (to this writer) one of the most relaxing in existence, and hearing different kind of pitter-patter depending on what you choose to soak would have been a relatively simple-seeming way to immerse the player in the game’s world just that little bit more.

You can also customise your cloud’s default colour and, in a neat touch, manually draw a face on it. It’s a cute feature that allows you to affect a bit more of a personal touch on the game, or just draw genitalia on your cloud as so many of you are no doubt desperate to do.

There’s something just a tiny bit cynical about the “please like me!!” cutesiness of Rain On Your Parade, but despite our best efforts we ended up doing so. Just. It coasts on “what will they do next?” novelty rather than any kind of meaty, significant gameplay, but sometimes that’s okay. It’s something new, which is appealing, and the toybox feel of the proceedings lends itself to a broad appeal – we can see young kids and people who vibe with its twee presentation getting a kick out of it. If you’ve had your fill of ‘cutesy’, though, you might find yourself hoping for a break in the clouds.

Ubisoft's 'Irresistible Deals' Event On Switch Ends Soon, Up To 75% Off (North America)