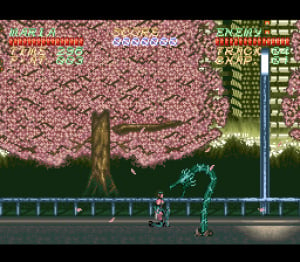 To best understand Psycho Dream – which has finally come to the west thanks to its addition to the Nintendo Switch Online SNES line-up – you first need to understand Nihon Telenet. It was a prolific company throughout the late 1980s and early 1990s, and while its games often had some interesting concepts (and some legitimately talented development staff behind them), they tended to be rushed and unpolished, to put it nicely. Even its best games – like those in the Valis series – ended up being fun despite their other significant issues, but couldn’t compare to games from the likes of Capcom, Sega, or Konami.

Psycho Dream is very much a Telenet game, having been developed by its subsidiary, Riot. The concept and artwork were provided by manga artist Marino Nishizaki, the scenario was co-written by Kenichi Nishi (who later went to Square before founding cult favourite studio Love-de-Lic), and the music was composed by Michiko Naruke (who later work on the RPG series Wild Arms). The story imagines an alternate world where a major form of entertainment is virtual reality films called D-Movies (the “D” is for “Drug”). These are so realistic that users view them as a form of escape, causing them to fall into deep comas, and eventually die. A task force of “debuggers” called the Diamond Dogs is formed to delve into the dreams of such victims, in hopes to save them. The focus of Psycho Dream is a seventeen-year-old girl named Sayaka, while the two debuggers who enter her mind are Ryo Shijima and Maria Tobari. 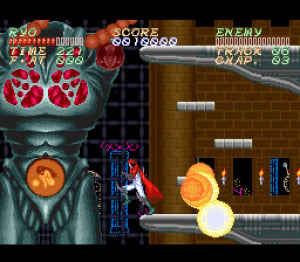 Players can choose from these two heroes, each of whom plays a little differently. Ryo wears a cool-looking red cape and swipes a sword in a rather unusual arc; Maria wears a leather bikini and wields a whip, seemingly like an S&M take on a Castlevania protagonist. Enemies drop coloured crystals, which can heal your character, give a temporary shield or give them extra special attacks (which hit everything on the screen), but certain colours also upgrade their weapons, and eventually cause them to transform, giving them special powers. It’s highly recommended that you play as Maria, then evolve into her strongest form as quickly as possible, which grants her butterfly wings and homing projectiles that attack everything on the screen. It helps mitigate the fact that your attacks otherwise don’t seem to have quite the range or power to adequately hit the enemies.

There’s not much beyond that, and otherwise, it’s a typical 16-bit side-scroller. The characters walk too slowly by default but holding down the R button will allow them to run, kicking up the pace a bit. You only get a single life, though there are a few checkpoints throughout each stage (called “tracks” here), and you have unlimited continues, so it’s not enormously difficult. But it is fairly rote, with stages that technically aren’t that long but certainly feel like they go on forever, featuring characters that control slightly awkwardly, fighting enemies that aren’t fun to fight. Boss fights also tend to drag on, as it’s not always clear when your attacks are harming them, despite them having their own life meter. 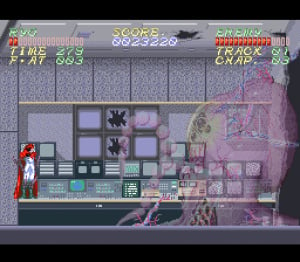 It’s worth bringing up Christopher Nolan’s 2010 movie Inception, which involves characters entering someone else’s mind. A central issue with that movie is that it poses a dream world filled with endless possibilities unconstrained by physical reality… and then presents that world as a mostly standard action movie anyway. Psycho Dream has pretty much the identical issue, in that it teases a certain kind of craziness, but doesn’t take full advantage of the concept, as much of the game just takes place in a post-apocalyptic city. The backstory seems to have been written as colour content for the intro and ending; it’s quite the missed opportunity.

The most interesting part of Psycho Dream is the boss encounters. The first stage boss is a translucent blob that uses its tentacles to burst through the walls and attack your character; the second boss is an enormous cocoon that breaks out with what appears to be a fire-spewing phallus. The first few stages are a little boring graphically, but the design sensibilities pick up in the third stage, with hauntingly pink and golden city backdrops. The music is also very dissonant and borderline unlistenable on its own, but it does heighten the surreal atmosphere that the game aims for, though never quite hits. To sum up, it is quintessential Telenet; a flawed but fascinating cult classic that’s weird enough to make it stand out from other similar titles. 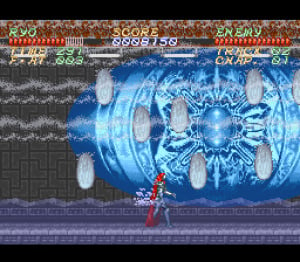 Psycho Dream almost came out in North America under the name Dream Probe, and was even reviewed in game magazines. Alas, American publisher Renovation closed its doors before it could make it to market. There’s minimal Japanese text in the game anywhere, though it would’ve been cool if the review ROM was made available for the Switch Online release.

Psycho Dream’s stature in the world of retro gaming is perhaps artificially enhanced by the fact that we almost got it in the west back in the day. As such, it’s one of those obscure Japanese games which has cult standing because western magazines actually reviewed it ahead of its cancellation. However, unlike titles such as Dracula X: Rondo of Blood and DoReMi Fantasy: Milon’s DokiDoki Adventure – both of which are import titles which saw western release on the Wii – Psycho Dream isn’t quite the classic that some would have you believe. It’s still worth a play for purely historical reasons (and, as it’s on Nintendo Switch Online, it’s not like it will cost you extra to experience it), but just go in with expectations low; you might then enjoy its quirkiness.