Pete the Cat and His Four Groovy Buttons

Story CD: Style, Structure, Substance, and the Principles of Screenwriting

It Grows on You: And Other Stories

Added to wishlistRemoved from wishlist 0
$19.79 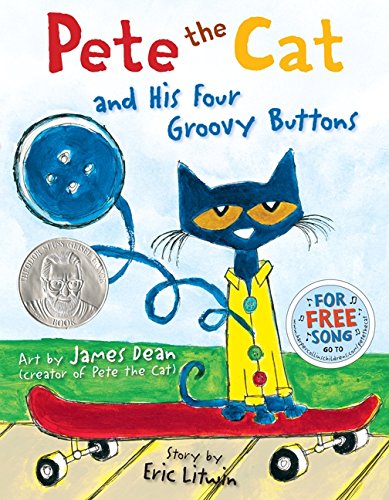 Pete the Cat is wearing his favorite shirt—the one with the four totally groovy buttons. But when one falls off, does Pete cry? Goodness, no! He just keeps on singing his song—after all, what could be groovier than three groovy buttons? Count down with Pete in this rocking new story from the creators of the bestselling Pete the Cat books.

At HarperCollins, authors and their work are at the center of everything we do. We are proud to provide our authors with unprecedented editorial excellence, marketing reach, long-standing connections with booksellers, and insight into reader and consumer behavior. Consistently at the forefront of innovation and technological advancement, HarperCollins also uses digital technology to create unique reading experiences and expand the reach of our authors.

HarperCollins was founded by brothers James and John Harper in New York City in 1817 as J. and J. Harper, later Harper & Brothers. In 1987, as Harper & Row, it was acquired by News Corporation. The worldwide book group was formed following News Corporation’s 1990 acquisition of the British publisher William Collins & Sons. Founded in 1819, William Collins & Sons published a range of Bibles, atlases, dictionaries, and reissued classics, expanding over the years to include legendary authors such as H. G. Wells, Agatha Christie, J. R. R. Tolkien, and C. S. Lewis.

The house of Mark Twain, the Brontë sisters, Thackeray, Dickens, John F. Kennedy, Martin Luther King Jr., Maurice Sendak, Shel Silverstein, and Margaret Wise Brown, HarperCollins has a long and rich history that reaches back to the early nineteenth century and offers our publishing team a depth of experience.

Pete the Cat and His Four Groovy Buttons