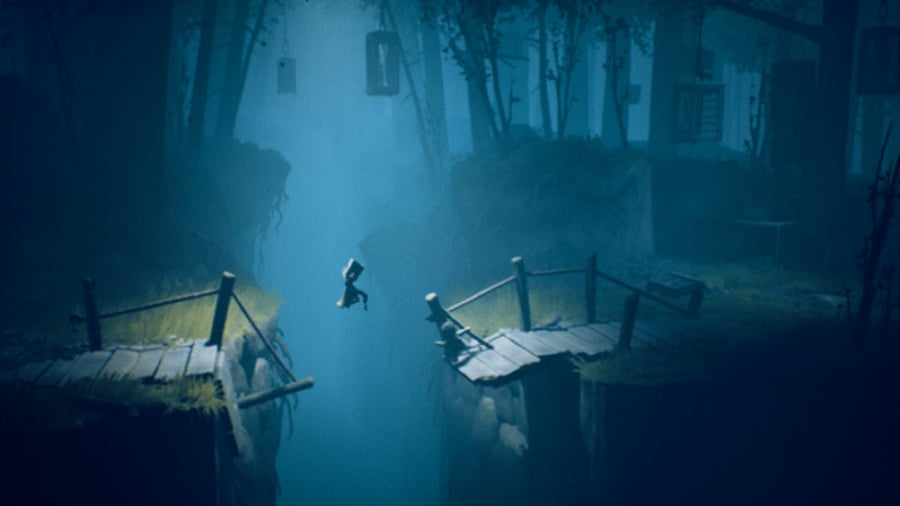 Ever been somewhere you know you shouldn’t? Fear and curiosity can entwine themselves into intoxicating shapes, dancing in your guts as you push ever forward into the dark, knowing that the consequences of your being discovered will most likely be dire and terrible? That’s what Little Nightmares II goes for, and it is almost entirely successful in these ambitions..

The sense of place, in fact, is as convincing as something like the original Oddworld games all the way back on the original PlayStation, with similarly weighty, panicked gameplay to the point that we’d be prepared to call Little Nightmares something of a spiritual successor to the adventures of Abe. The “cinematic platformer”, though, carries with it some mechanical baggage that the genre has never been able to get past. That may be contentious, as it could be reasonably argued that the more tiresome, laboured elements of the thing are part and parcel with the game’s intent and the player’s crucial sense of vulnerability. 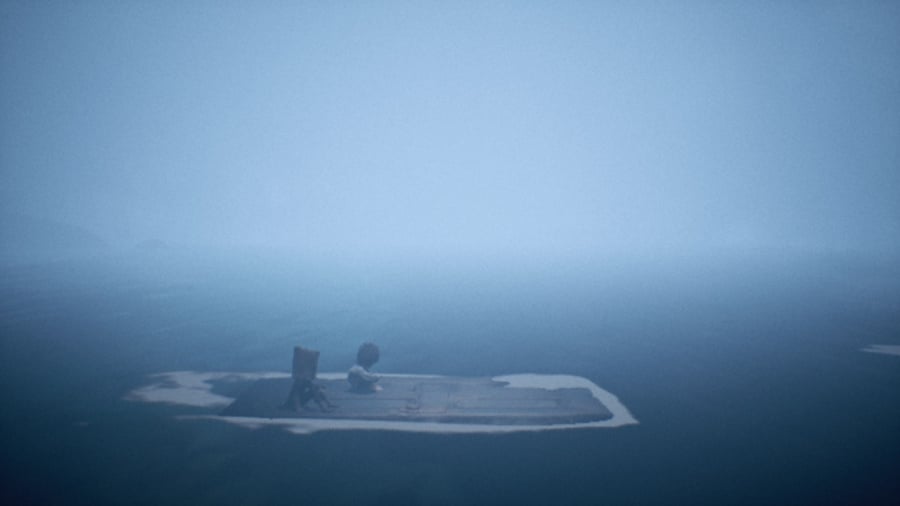 We believe that while that’s true to an extent, there are still fundamental issues with a platform game that puts the feel of the world over the feel of the character. Because everything’s so rigidly in keeping with the trappings of games like Inside, Deadlight et al, you will encounter instances of unclear objectives simply because what you can and can’t interact with isn’t always totally clear. You will suffer arguably unfair deaths when you’re caught by traps you not only can’t see, but couldn’t really be expected to see.

In a way, you can’t fault Little Nightmares II for this; it’s entirely intentional, and definitely serves to enhance the intense, threatening atmosphere. Some, though, will be frustrated by the unfairness. The genre’s customary trial-and-error gameplay is here in spades, and it’s entirely on you whether or not you’ll push past it in order to willingly experience the game on its own terms.

You should, though, if you can. Little Nightmares II is a very good example of its type, with beautiful diorama-esque levels that manifest as the effective equivalent of the memorable single-screen platformer or fixed-angle survival horror game, while avoiding the limitations of this approach. We found almost every second of the game dripped with tension and dread, exploding into raw, often hilarious panic when we’d be discovered. And that’s not the royal “we” this time, because Little Nightmares II lets you bring a friend. Early in the game, player character Six (returning from Little Nightmares: Complete Edition, natch) meets up with Mono, a similarly-seemingly-meek creature who tags along with Six. 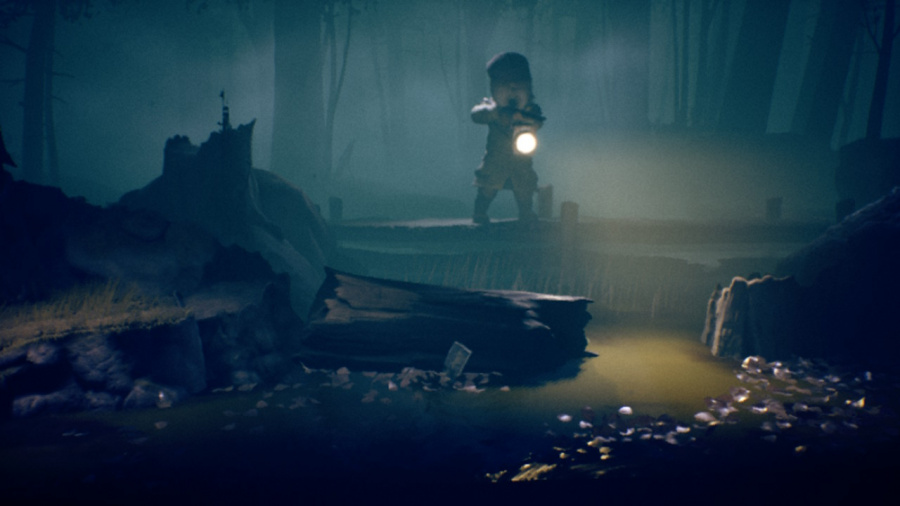 You’d think that this would mean some multiplayer was in store, but in an interesting wrinkle, this isn’t the case. In a sense it’s disappointing, but with a friend, you could necessarily take comfort in the distance afforded by a second brain helping you with the puzzles and traversal. Without one, you’re responsible not just for your own life, but that of another person. Thankfully, we didn’t find that this led to the whole game feeling like an escort mission – those most hated of all missions! – as Mono’s A.I. is brilliant.

Sure, you can see the seams where prescribed paths are being followed, or that the game allows just that little more leeway than you’d expect to account for a second moving target. None of it, though, breaks the world or damages the rich atmosphere. Even though it would arguably be to the detriment of the carefully-curated feel of this horror adventure, we still think it’s a strange decision to focus so heavily on the interplay between Mono and Six while completely neglecting the idea of multiplayer.

Level design is strong throughout, and takes into account your second character very effectively, with them offering assists in a way that ranges from unobtrusive to crucial. As well as the exploration, platforming, stealth and desperate escapes, there’s also a nice line in slower, more tension-building moments. Beautiful areas appear fleetingly and you’ll simply move on, but it’s worth taking your time to appreciate the detail. For one thing, there are optional collectables to find such as a variety of different hats – though, admittedly, these could have a negative impact on the game’s ambience if you choose to equip them. 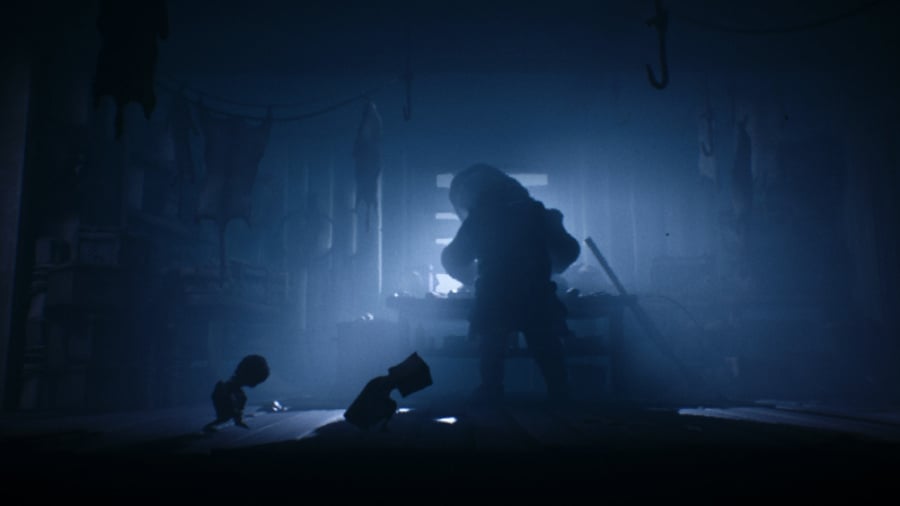 Graphically it’s all rather impressive. The world is rich with detail and performance is very good – in handheld mode, it felt to us like a locked 30fps, with no discernible drops even when things get crazy. However, there is a visual trade-off – the resolution seems low, with graphics that are often surprisingly blurry as a result. Docked, this seems less pronounced, but in a strange sort of way, the blurring actually enhances the nightmarish feel of the proceedings. It doesn’t excuse it, but with a free demo available you’ll be able to make your own mind up on how you feel about this one’s looks. We were taken with the sound design too – you’ll find yourself flinching in just the right spots, with brilliantly subtle ambient effects joining with loud, punchy bangs and booms when things kick-off.

Little Nightmares II is nothing less than engaging from start to finish, with superb pacing, entertainingly varied level design and excellent graphics and performance. Its only real flaws are based on the imprecision that comes with all games in its sub-genre, as well as a few sections that feel more about trial and error than reactive survival. In our view, though, this doesn’t detract from a far superior sequel and one of the best cinematic platformers we’ve had the privilege of enjoying. A real stylish treat.

Crash Bandicoot 4: It's About Time Hits Nintendo Switch This March

Pillars Of Eternity Will Get No More Patches On Switch, Despite Unresolved Issues