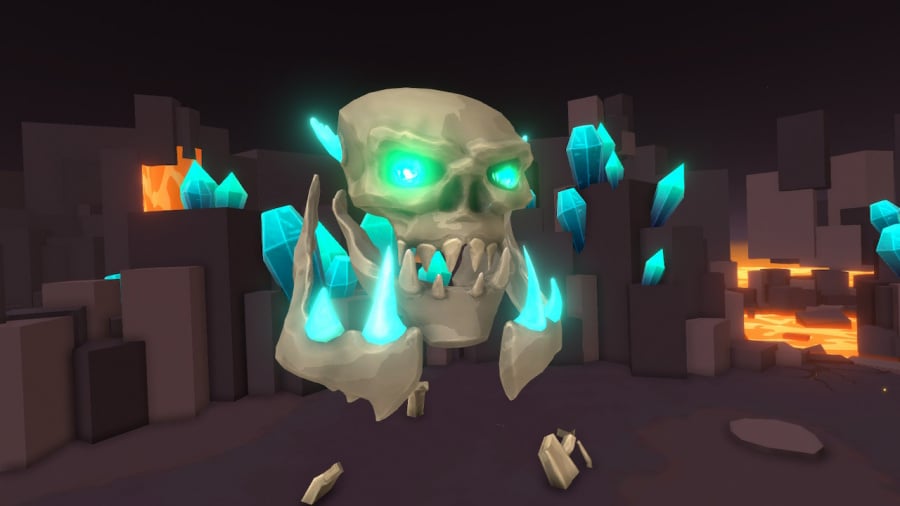 A little over a year ago, a new bullet hell game called Profane released on the eShop and was swept away almost immediately in the constant stream of other new titles. Due to disputes with the publisher, Overpowered Team decided to have the game taken off the eShop a few months later, while it worked on re-releasing a new version that the studio had more control over. That re-release has now launched as Godstrike and… we wish we could say it was worth the wait. Unfortunately, the final product is rather underwhelming.

Godstrike’s narrative is kept relatively simple. It tells a tale about a civilization of people that benefit from the power granted to them by magical masks from their unnamed god. Of course, it doesn’t take long for power to corrupt, and one of the mask owners decides to start consuming other masks and spreading chaos throughout the land. The people successfully seal the monstrosity away in a temple, but the passage of time allows the evil mask to grow in power again, so it’s up to your hero and their mask to fight into the depths and restore peace to the land once and for all. 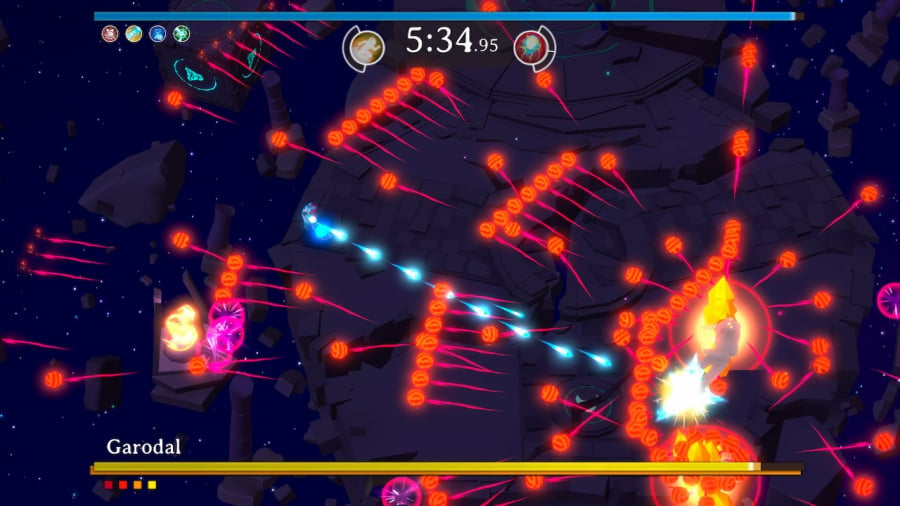 It’s an interesting — though somewhat tired — premise, but Godstrike doesn’t invest too much effort into creating a narrative that can really resonate with the player. You’re left to fill in the blanks as vague, throwaway lines before each boss fight indicate something about the personality and past of the person trapped under that mask’s power, and… that’s about it. Still, it’s tough to be too critical of an arcade game with a limp story, and what’s here at least provides a nice general framework to give the battles a little more meaning.

The bulk of your time with Godstrike will be spent attempting to overcome its gauntlet of punishing boss fights, each of which is sure to take quite a few tries to take down. Your primary attack consists of a fast-firing peashooter that rains fire wherever you direct the right stick, while your left stick is tasked with guiding your nimble hero through the scores of projectiles that the bosses toss your way in a constant deluge. Considering each boss has multiple phases and health bars, it’ll take a bit of time before you’ve learned the patterns well enough to see these fights through to the end. But, then, that’s sort of where the main problem of the gameplay loop comes in.

See, the whole gimmick of Godstrike is that your life bar is literally just a timer at the top of the screen that ticks down. If you get hit by anything, it’ll drop fifteen or thirty seconds off the timer, and if it gets down to zero, the next hit knocks you out. It’s one of those ideas which sounds cool theoretically, but it quickly comes apart once you see how it’s executed. In practice, the whole ‘your time is your life’ thing boils down to you dealing with a constantly decreasing health bar while you’re attempting to tackle an enemy who already puts up more than enough resistance. There’s no feeling of empowerment or innovation here, just a constant sense of soft frustration as you lose health every second… well, just because. 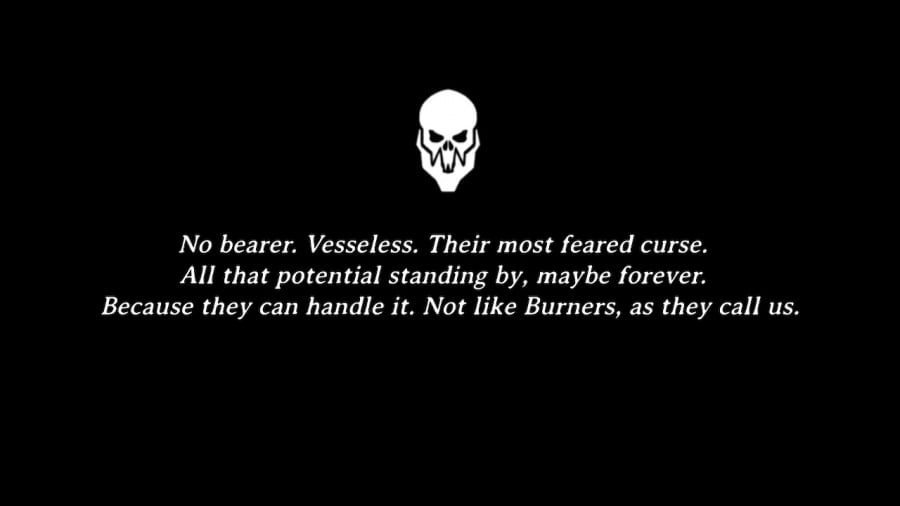 An attempt at making this idea a little more interesting is found in the loadout system, but even this feels shallow. Every defeated boss grants you access to both a new active and passive buff—an upgraded gun or a temporary time slow—to make future fights a little easier. You can equip up to four of the passive buffs as you see fit, but the active buffs demand that you give up some of your precious seconds while they’re equipped. The problem is, most of the active buffs don’t feel like they meaningfully improve your chances, and the time cost incurred to even have them means it often makes more sense to go with only one or two staples.

It feels like this half-hearted ‘hook’ was decided upon to make Godstrike stick out from other challenging bullet hells, but building the whole game around it only weakened the otherwise strong elements. The boss fights themselves are entertaining to learn and master. The controls are tight and responsive. These two things alone provide a nice foundation upon which a better game could’ve been built. And yet Godstrike never capitalizes on that, because you’re too often left wondering why you’re playing a game that makes itself needlessly more frustrating without ever providing compelling reasons for why it must be so. The time mechanic is certainly a unique idea — it’s just not a particularly good one. 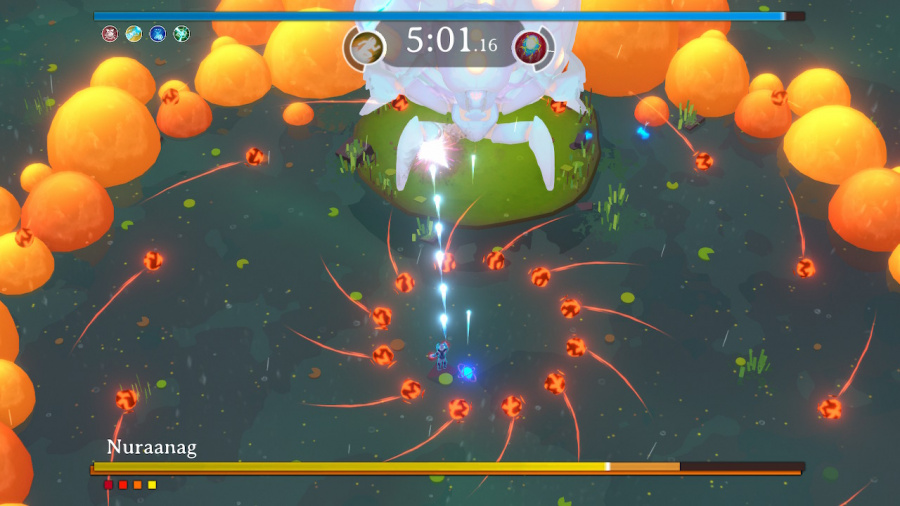 The disappointment continues with the presentation, which fails to impress. The art style lacks any distinguishing identity or visual flair, giving the whole game a flat, simplistic, uninspired appearance. Textures are extremely basic, animations feel rather stiff, and the boss designs themselves are unmemorable. How many times have you fought a rock monster in video games? Or *gasp* an evil floating skull? The music is similarly uninspired; it’s simply there. Sometimes, not even that — we’re still not sure whether an awkward boss fight that had no music was just a weird stylistic choice or a glitch.

For those of you that can get past all the drawbacks, there’s some replayability to make the package a little more worthwhile, at least. Depending on your skill level, it should only take a few hours to get through the ten fights here, but then there are other modes to play through. ‘Arena’ gives you access to all buffs and lets you pick whatever boss you want, so you can focus on getting better times and trying new strategies. ‘Challenge’ tasks you with running a gauntlet of all the bosses while dealing with certain buffs disappearing. ‘Daily Challenge’ is pretty much the same thing, except you can only play it once per day. All told, we’d estimate you could squeeze maybe ten or fifteen hours out of this before putting it down for good.

Godstrike in many ways feels like an early access game. There are glimpses of a better game in here somewhere, but the overall unpolished feel of its design and presentation really drag down the otherwise solid controls. Revising (or removing) the time mechanic and honing in on a more distinctive art style could’ve made this one a tentative recommendation but, as it stands, that’s impossible. If you want a good boss rush game with similar gameplay, we’d recommend you pick up Furi; if you’re looking for a good shmup, there’s no shortage of those to be found on Switch. Either way, we wouldn’t bother with this one unless you’ve exhausted all other options.

Street Fighter Characters Are Coming To Power Rangers: Battle For The Grid