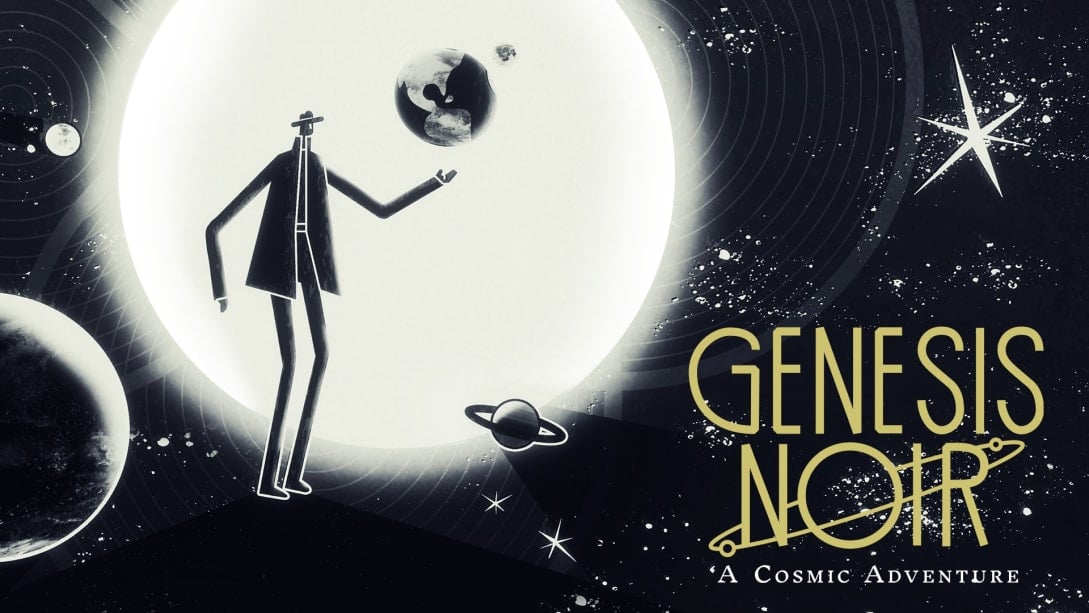 Genesis Noir’s been a long time in the making. Developed by Feral Cat Den, this “non-traditional” point-and-click adventure was announced back in 2017 and was due to launch last year before facing delays. Originally planned for PC and Xbox One, publisher Fellow Traveller has now revealed that a Switch version is joining them on March 26th.

Described as a poetic adventure game – one that’s set “before, during, and after The Big Bang” – we’ll be playing as No Man, a watch peddler caught within a cosmic love triangle. Speaking more about this stylish release, Fellow Traveller released this outline.

Genesis Noir is a surreal noir adventure spanning time and space. When a love triangle between cosmic beings becomes a bitter confrontation, you’ll witness a gunshot fired by a jealous god—otherwise known as The Big Bang. Jump into the expanding universe and search for a way to destroy creation and save your love. Genesis Noir seamlessly blends interactive storytelling and generative art into a narrative tale of time, space and music.

As “No Man,” a watch peddler trapped in the deterministic cosmos, you will explore black holes, primordial Earth, and jazz cafes. With a focus on tactile puzzles and exploration, you’ll experiment with objects to discover how they can be manipulated to progress your journey. Witness the birth and history of mankind. Find comfort in a glass of gin. Become acquainted with the massive, the microscopic, and everything in between. Dial a rotary phone; destroy a civilization; plant a garden; improvise with a musician; create life—all in your search for a way to save Miss Mass.

Available for $14.99, you can find it now on the North American eShop, though the game’s not currently listed in Europe. Better yet, Fellow Traveller is offering a 20% launch discount – starting now until April 2nd – bringing this down to $11.99.

Will you be attempting to save Miss Mass on March 26th? Let us know below.

Ape Out Is Getting A Fittingly Stylish Physical Edition On Switch

Super Mario Bros. 35's Next Special Battle Takes Us Through Every Course Once More