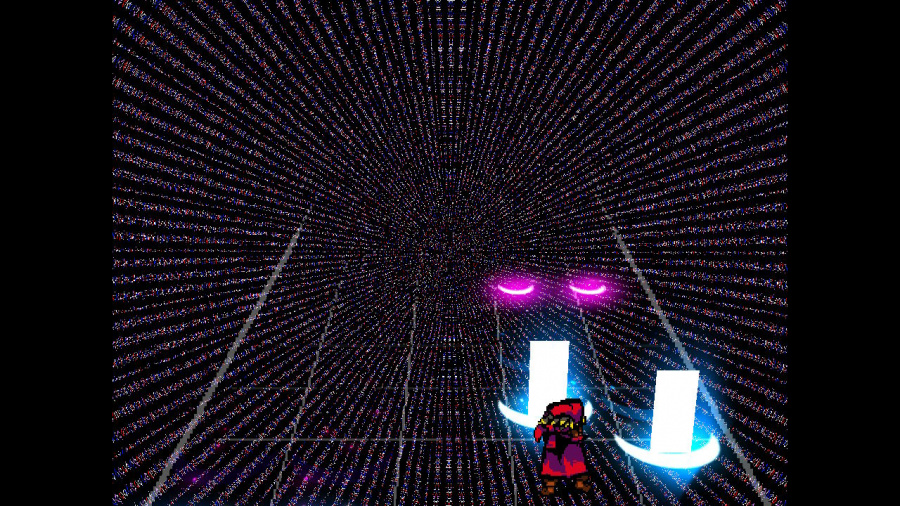 The RPG genre can be incredibly daunting for many people. This can be for any number of reasons; games like Xenoblade Chronicles and Bravely Default II can be pretty lengthy experiences, filled with dozens of characters, a wide range of stats to keep track of, and – sometimes – an awful lot of grinding. Of course, in more recent years, numerous developers have taken steps to subvert genre expectations to great success, and Everhood is the latest example of a game that very much looks like your average RPG on the surface, but otherwise proves itself to be something wholly original. It also happens to be absolutely bonkers.

We can only imagine that when trying to decide what to put into Everhood, developers Chris Nordgren and Jordan Roca simply shrugged, popped on a pair of sunglasses, and said “let’s just add it all”. As a result, Everhood is essentially part-RPG, part-rhythm action game, part-kart racer, and part-bullet-hell. It’s a bizarre blend of seemingly disparate elements that, in theory, shouldn’t work together. But as you get further into its story, you just sort of go with it, accepting whatever bizarre, perplexing character or situation crops up along the way. 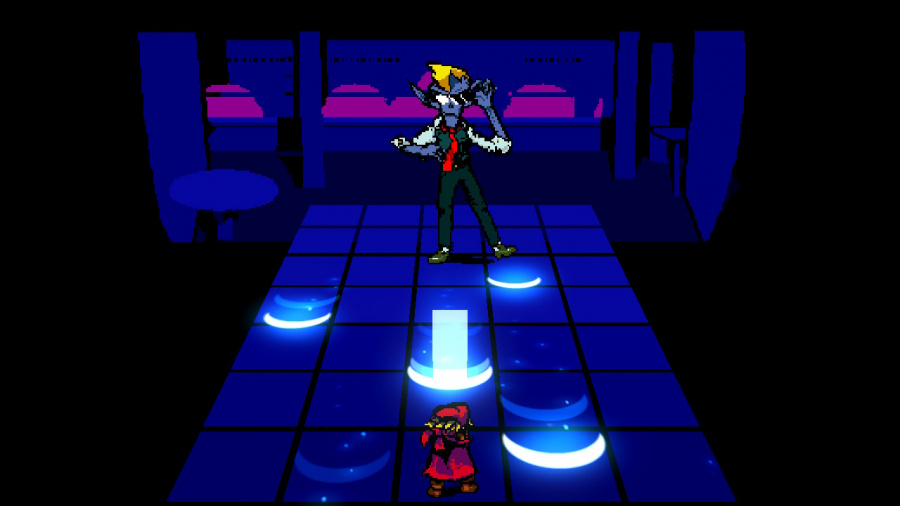 The plot feels deliberately vague and obscure for the majority of the 5-6 hour experience. In a nutshell, you take on the role of Red, a wooden doll who’s on a quest to retrieve his stolen arm from the dastardly Golden Pig. That’s about as much as we’re willing to say about the plot without spoiling anything, but needless to say, the game throws you into a wide variety of ridiculous scenarios that will make you snort with laughter before questioning your own sense of humour. We simply loved walking into a nightclub scene only to suddenly find ourselves in a kart racing event against 19 other racers.

The cast of characters that accompany you on your journey is what really makes the ‘RPG’ element of the game truly special. As you make your way from one realm to the next, you’ll meet all sorts of strange creatures, including Red Dead Mushroom, Banjo Frog, Knight lost-a-lot, and our personal favourite, Noseferatchu. You never quite know which characters are there to help you, and which ones wish to hinder your progress. This is also what makes the battles so memorable; each one feels like an event, with your opponent displaying its own unique personality and quirks. There’s absolutely no grinding involved with Everhood, and no throwaway enemies as a result. 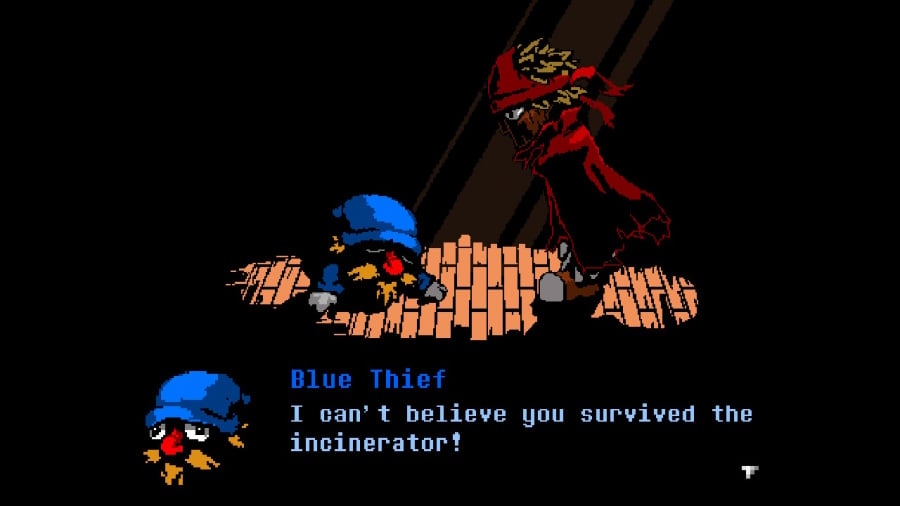 Oh yeah, the battles. For a game that, by and large, is fairly minimal with its visual design, the battles are true spectacles from start to finish. You’ll come face-to-face with your opponent, with a kind of Guitar Hero -inspired fretboard laid out between you. As your enemy attacks, notes fly down each of the five paths, and it’s your job to avoid these by dodging or jumping over them. As you get further into the games, you’ll also gain the ability to absorb certain coloured notes and fire them back to your enemy, chipping away at their health bar.

From a gameplay perspective, the battles require little more than moving from left to right and back again in order to avoid the projectiles. It’s simple enough for pretty much anyone to grasp, but we’d be remiss to say that they’re easy. Even with multiple difficulty options that you can change at any point during the game, some of the battles can be fiendishly tricky, with waves and waves of attacks hurling in your direction with very little room to manoeuvre. What’s crucial, however, is that it never feels too difficult, and even if you happen to die multiple times, you can restart the battle immediately. 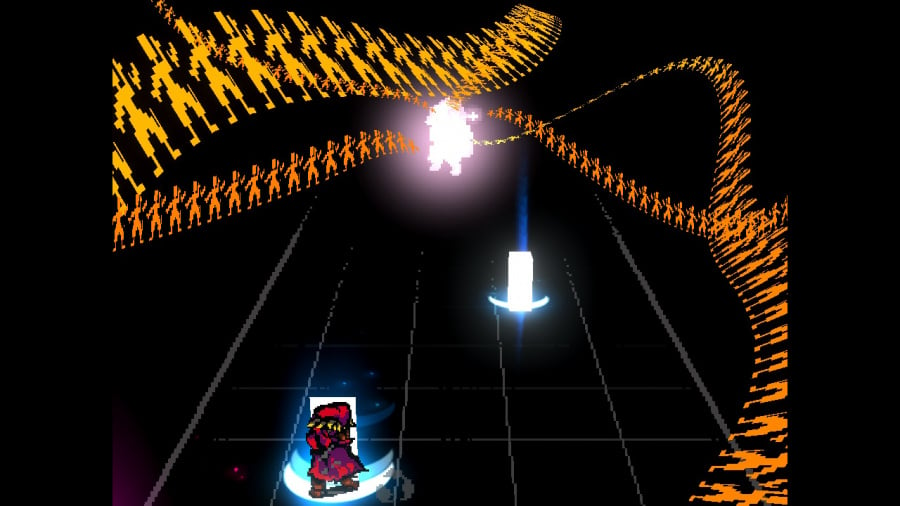 With a predominantly black background and solid colours for the characters and environments, the battles come to life with blazing colours and psychedelic patterns lighting up the screen. The musical notes themselves are like little blocks of pure light that stand out even more thanks to the contrasting dark background. Some battles go even further, flipping the screen around, or warping the visuals to obscure the notes flying in your direction. We can’t praise these sections enough; they’re immensely fun, and despite the fact that there’s little variation from one fight to another, they somehow never outstay their welcome.

Naturally, given the focus on rhythm combat, Everhood features a frankly astounding array of excellent musical scores throughout the game. It’s all killer with no filler, and everything included here – from smooth jazz to thrash metal – will stick in your mind long after the credits roll. The catchy music mixed with the awesome visual spectacle makes for one of the most uniquely memorable games in recent years. With this in mind, we’d absolutely recommend playing in docked mode if you can, but the game is just as engaging in handheld mode or on a Switch Lite.

Of course, it’s not all sunshine and roses. While the vague, almost random sequence of events that make up the game’s plot is mostly endearing, there’s an undeniable sense that you’re never quite sure what you need to be doing next. For newcomers of the genre, this might prove to be an instant turn-off if you’re used to having your hand held a bit more. Elsewhere, there are numerous spelling errors in the dialogue throughout the campaign, and while not deal-breaking in any sense, these can be a tad distracting at times.

Everhood is one of the most memorable games we’ve played in recent years. Its utterly bonkers plot and weird cast of characters is reason enough to check it out, but the instantly accessible rhythmic combat will keep you hooked from the very first battle to the epic final boss encounter. Some may be put off by the minimal visual design and deliberately vague sequence of events, but for those after something a bit different, Everhood delivers originality and unique gameplay in spades and absolutely deserves a place in your Switch library.