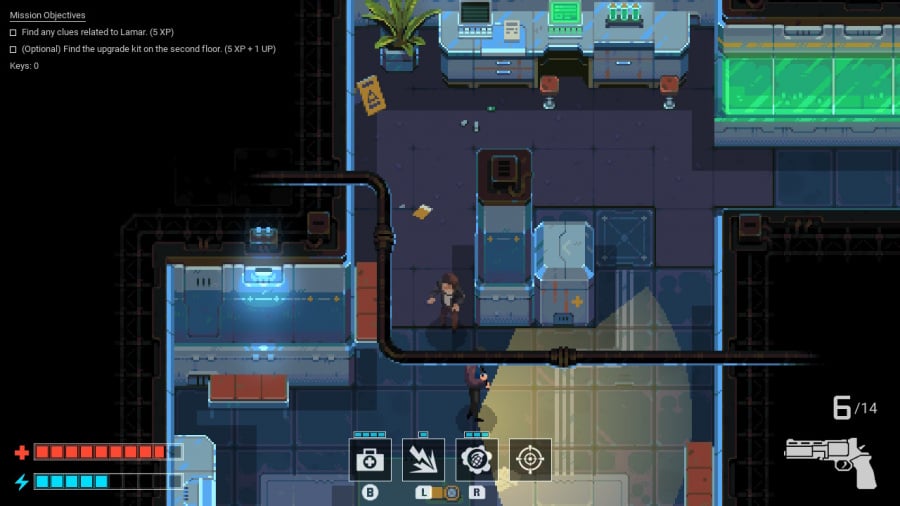 Stealth games are pretty hard to come by these days. Good ones are even fewer and far between. The good news is that Disjunction feels like a breath of fresh air, then. Its gameplay is like a love letter to stealth games of yore, melding together tight, responsive gunplay with effective close-range combat, all wrapped up in a nostalgic, visually arresting package that absolutely calls back to the MSX2 Metal Gear titles.

Taking place in a dystopian, cyber-punk version of New York City, you play as three unique characters, each with their own distinct narrative. The storyline is surprisingly engaging from the start, with codec conversations and physical encounters driving the plot as you advance to each level. There are plenty of moments where you’re given the option to choose between various dialogue choices to help guide the narrative, and these are actually well implemented for the most part.

The core gameplay sees you sneaking around various environments, avoiding the watchful gaze of the armed guards, security cameras, and mounted turrets. With a simple press of ‘X’, you’ll go into a sneaking stance, which slows your movement down considerably, but also allows you to visualise your enemies’ field of vision in real-time. Run around haphazardly, and you’ll alert them with noise; even worse, a gunshot will bring every guard in the immediate vicinity running to your location.

Thankfully, being spotted isn’t the end of the world. You’ve got a number of tools at your disposal to wrench yourself out of any tricky situation. Primarily, of course, you have your gun; although capped with limited ammo, you can aim with traditional twin-stick controls and dispatch most guards with just a few shots. In addition, you’ve got grenades which come in frag and smoke forms to either bump off a few guards in one go or temporarily obscure their vision. When push comes to shove, you can simply tap ‘L’ a few times and give your foes the good old one-two.

Of course, this isn’t to say the game is a total cakewalk; being spotted often results in swift death, whether it be by overwhelming odds, or falling foul to just one particularly deadly enemy. Much like classic stealth games, staying hidden is often the key to success, and makes for a far more enjoyable experience than if you were to go in all guns blazing. If we had one major complaint of the experience, it’s that there’s an over-reliance on the same ‘go here, find keycard, unlock doorway’ gameplay loop.

With striking gold, blue, and green colours, Disjunction certainly looks the part, and depicts its cyberpunk setting successfully. There’s plenty of atmosphere, and this is further elevated by an ambient soundtrack that really sets the tone in every level. The game’s overall length is a tad disappointing; you’ll rinse it in just a handful of hours, and there’s little incentive for multiple playthroughs. If you’re itching for a decent new stealth title though (and aren’t quite willing to go for the cloud version of Hitman 3), then Disjunction is a glorious homage to the entire genre.