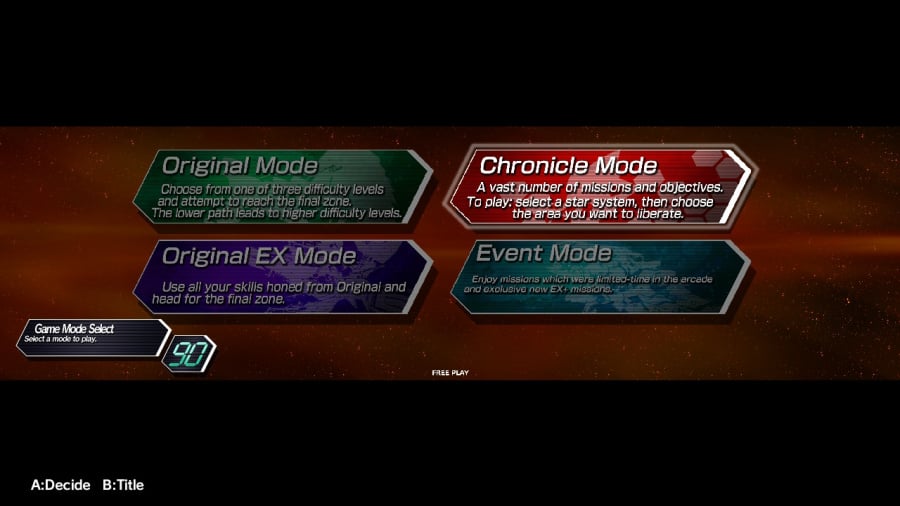 You could, should you be so possessed, slap on a pair of swimming goggles, stick your head into a giant fish tank filled with koi carp, and attempt shoot wasabi peas at the inhabitants using a straw. Or, you could save yourself the mess – and a potential visit from the RSPCA – by sending your piggy bank to the Nintendo eShop and asking them to empty it in exchange for yet another round of Darius gaming. At ¥4180 (approximately £28/$40), equal in price to sister release G-Darius HD, you may be debating whether to pick up Dariusburst Another Chronicle EX+ or just wait for the physical combination in the forthcoming Darius Cozmic Revelation. Before you make a decision, let’s have a little history lesson. 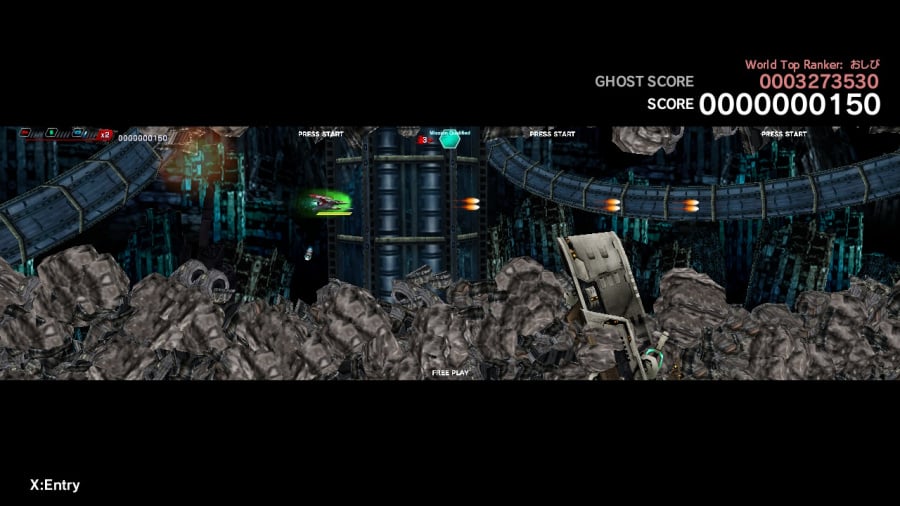 Dariusburst came out of the deep blue in 2009 for the PlayStation Portable. It was re-engineered a year later as Dariusburst: Another Chronicle, a dual-screen arcade ‘taikan’ with flashing lights and rumbling seats. The arcade release’s Chronicle mode, a veritable galaxy of 3000 arranged stages updated via net-link, challenged arcade goers to liberate star systems from the Belsar hordes.

Now, Dariusburst: Another Chronicle EX+ bundles together everything that’s been before, but replaces Chronicle Saviours mode with Event mode: twenty-one stages that originally appeared in the arcade for a limited period of time, featuring new music from Zuntata’s Shohei Tsuchiya. 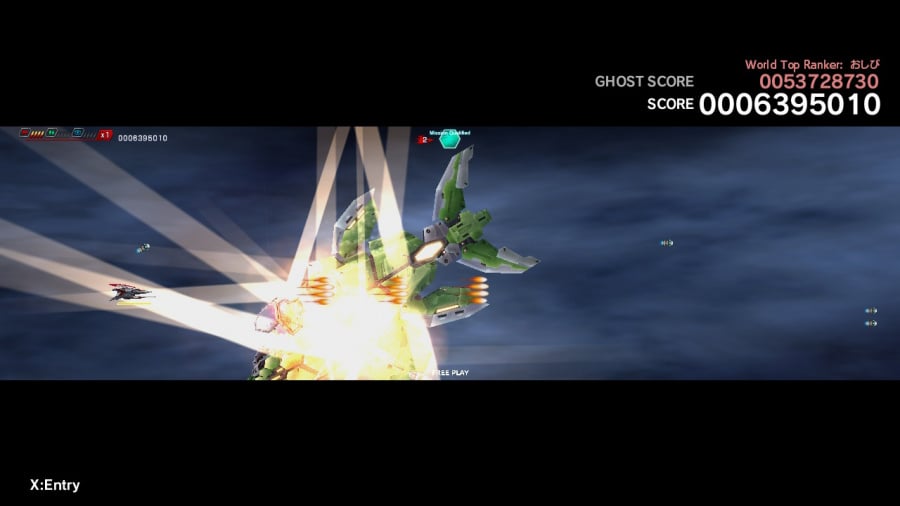 With Original, EX, Chronicle and Event mode options, this is a package with enough content to see you through to old age. The new Burst Cannon – a screen-spanning laser that can either be expended in a powerful blast or detached from the craft by double-tapping the button – reinvents series conventions. When detached, you can rotate the laser on an invisible axis approximate to your ship’s movements and then lock it into a position of your choosing. The magic of this system is that you can fix the blade at an angle and then camp behind it, using it as a shield to block enemy fire. The laser’s gauge doesn’t diminish as quickly as it does when attached to your ship, either, replenishing as it soaks incoming ordnance and asteroid showers. This affords you protection for prolonged periods during stages and boss battles alike. Should it run out, shooting down enemies quickly recharges it.

The Burst Cannon’s multifunctional utility is what makes Dariusburst so special. It takes a little time to get to grips with, but once you do its versatility breathes new life into the series. Yes, it makes things generally easier than previous titles, but figuring out how to create laser bridges to travel over giant mecha isopods, and when precisely to detach and retract it, makes it an incredibly fun tool. It can also be used in G-Darius-style beam duels, whereby you position yourself in front of a boss as they begin charging their cannon and then fire your laser to lock horns.

Even though battles usually offer several opportunities, initiating a duel in Dariusburst is more difficult than in G-Darius; but if you pull it off your diminutive ship is suddenly strapped with the laser equivalent of the grim reaper, cleaving white-hot death across the screen and obliterating your adversary’s health. To mix things up, you have a choice of nine Silver-Hawk ships with varying attributes, including the Gaiden Silver-Hawk with its Black Hole bomb and the high-powered Murakumo ship (previously exclusive to Chronicle Saviours) complete with option formations and modified Burst Cannon. 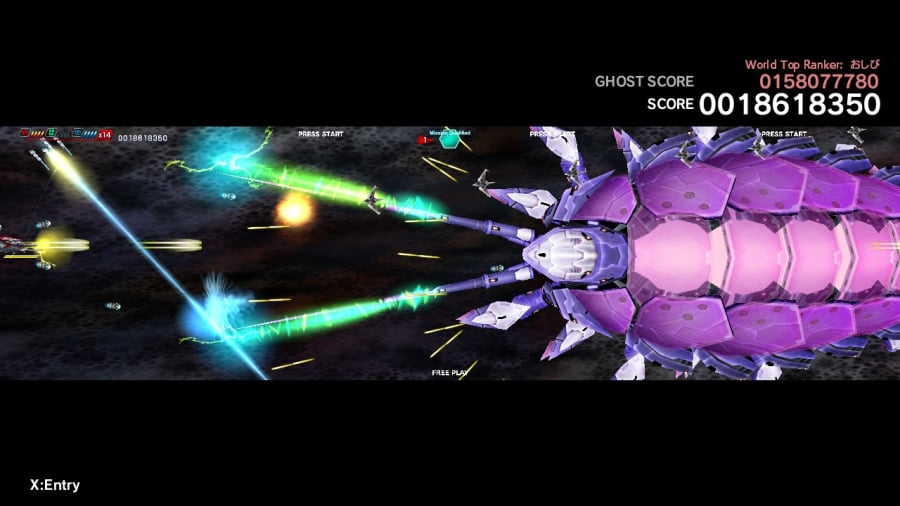 Dariusburst’s soundtrack is one of the series highlights, which is considerable praise considering the quality of its forebears. Here, Taito’s in-house Zuntata band has created an ethereal aural marvel; a haunting, dramatic composition infused with traditional Japanese instruments, sea-life samples, and hefty industrial timbre. Ranging from evocative expressions of Darius’s dark oceanic space-theatre, to war-like, adrenaline-inducing taiko drums that thunder in behind an earsplitting warning klaxon, it’s a model of game-enhancing sound design.

The broad slice of screen, mimicking the dual-display of the arcade, is a panoramic ticket to a marine-themed universe where your foe – the bio-mechanical Belsar army – plough waves of fishy fodder at you. Dimensionally, your craft is much smaller than in G-Darius, making the play area feel more expansive. This allows bosses – from teleporting barreleyes to serpentine oarfish – to commandeer the screen in battles that are heart-in-mouth epic. Although the Burst Cannon helps to provide defensive cover, it still requires quick-wittedness to see them out in a teeth-rattling incendiary explosion. Dariusburst’s ‘Great Thing’ face-off remains one of the most grandiose conflicts in gaming: the music grinding out beats to the rhythm of your heart-palpitations as a colossal iron-built sperm whale burns the screen alive with giant lasers, missiles and bullet spreads. 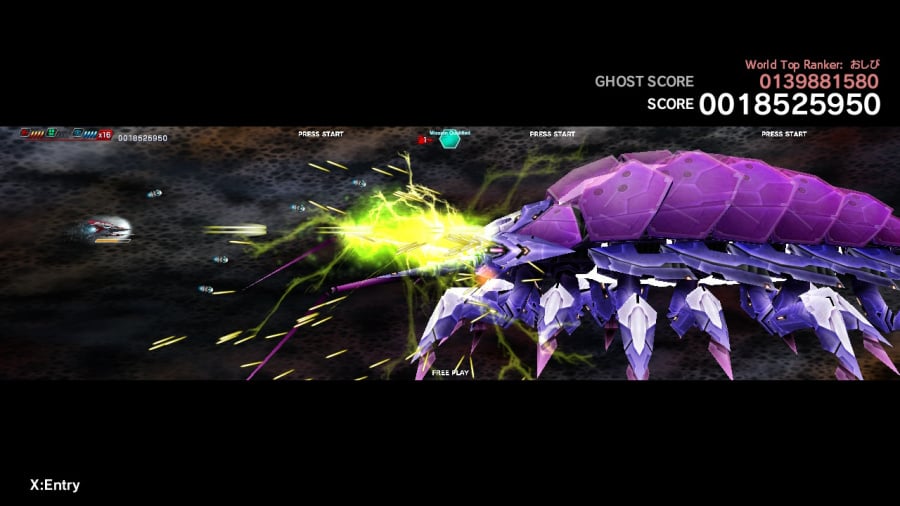 Sadly, the good news ends there. Dariusburst: Another Chronicle EX+ is as beautiful a game as it ever was, but compared to M2’s feature-rich collections – or even G-Darius HD – the port itself is so barebones that one can’t help but be disappointed.

It’s got online rankings, replays, and a ghost ship data function that allows you to download your own data or that of the world’s top ranker to try and better your score. Event mode’s new stages, while admittedly superb, are again just rearrangements of stages past; something that’s been done countless times across various modes since Dariusburst first appeared. It’s not that they deserve criticism for being there – they’re great for series fans to finally get to play – but one has to ask why Chronicle Saviours mode, the only one suitable for handhelds, is absent. Without it, you only have the condensed dual-screen panorama, and zero options to adjust it like you could in M2’s Darius Cozmic Collection. Trying to play any mode in portable is a bust: it’s just too damn small. It suffers as the PS Vita did, which is precisely why Chronicle Saviours was developed to work with that system. 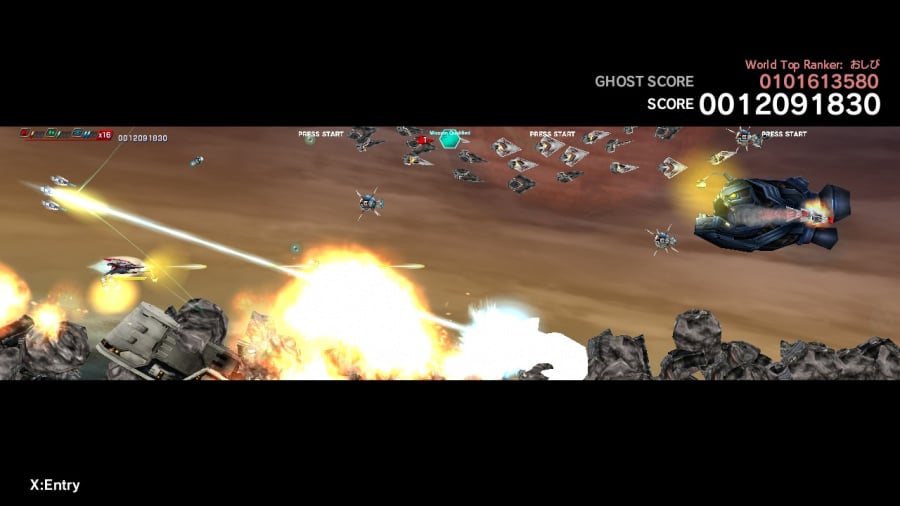 That leaves you with docked mode for the only really viable experience. And to be fair, Dariusburst is a game that comes to life when the lights are down, the volume is set to wake the neighbours, and you have a big enough slab of TV real estate to be drawn into its world. But ideally, 50” screens are the minimum here, and you’ll need to sit incrementally closer with each drop in set size.

There are zero screen configuration options anywhere, and Taito didn’t bother to add any wallpapers in, meaning your letterbox bezels are a permanent black void. The title screen’s ‘B’ button start prompt is incorrectly labeled, and there also seems to be a minor issue with introduction menus. We used a 55” TV for review, and the various pre-game screens displaying boss data and text were slightly distorted, with panels that have horizontal lines in the background appearing banded. The game itself, however, seems fine.

So, then, do you buy the Switch port of Dariusburst: Another Chronicle EX+ – where playing portable is essentially redundant but you have the new Event Mode stages – or do you just buy the Steam release of Chronicle Saviours, featuring 186 original stage variations to Event Mode’s twenty-one, a host of easter eggs and some neat DLC. It’s still fair to say that Dariusburst: Another Chronicle EX+ is a fabulous title, just one that has cannibalised itself with endless re-releases and content configurations. If we were purely scoring the quality of the game and the amount of enjoyment one can reap from it – and assuming you’re a shoot-em-up aficionado with a love of the series – you can add an extra point to the scoreline. As it stands, however, it’s a bit like buying a deluxe sushi box and finding out someone has eaten the two California rolls situated behind the label.

Japan's 35 Best-Selling Switch Games In The First Four Years, According To Famitsu