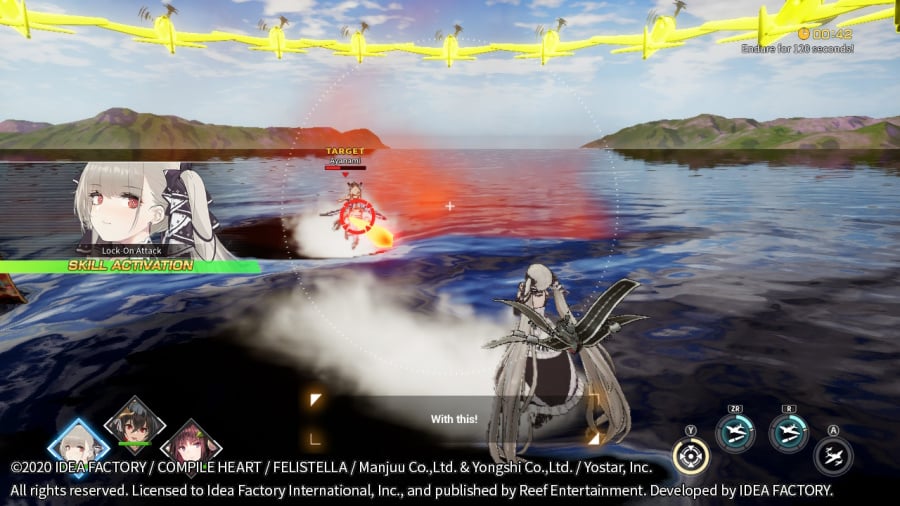 Azur Lane started life on mobile devices as a 2D blend of RPG mechanics and side-scrolling shooting. Its move over to console with Azur Lane: Crosswave brings with it some flashy 3D battle scenes, but the overall experience retains a similar structure and feel to its mobile counterpart. Fans of this type of game will absolutely relish the visual novel aspect of the experience, but those looking for some deep systems and engaging battles will be bitterly disappointed.

Developed and published by Idea Factory, the story for Azur Lane: Crosswave is utter nonsense, but engaging and straightforward enough for most players to follow along. It depicts four distinct nations – Eagle Union, Royal Navy, Iron Blood, and Sakura Empire – who must band together to defeat a mysterious group known as Sirens. The characters themselves are scantily-clad anime women who effectively act as their equivalent nation’s naval fleet, each woman representing a single ship. 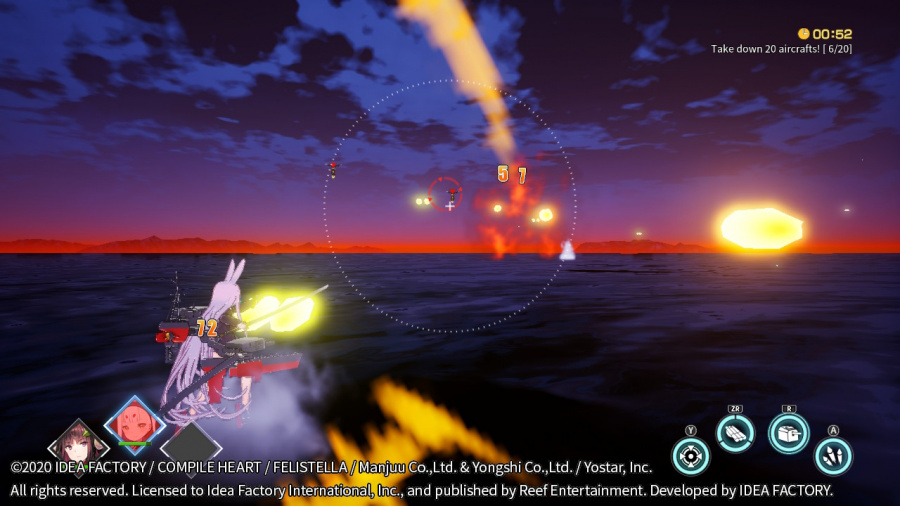 The majority of the game takes place within a visual novel format. There’s a lot of dialogue to sift through right from the start, and some conversations can go on for 5 to 10 minutes at a time. The good news is that the characters themselves feel reasonably unique, and while there’s rather a lot of them to keep track of, you’ll generally find it’s fairly easy to distinguish who’s who. What helps this further is you’ve got the character of Shimakaze who acts as the main protagonist for the majority of the story, anchoring the rest of the cast.

Progressing through the story requires you to navigate a rather rudimentary overworld, encountering ‘events’ and ‘battle events’ as you go. The events are simply sequences of dialogue to move the story along, but the battle events are where the other side of the gameplay rears its head: naval combat. These are full-3D setpieces in which you and your squad face up against a group of ships, aircraft, and rival characters. Which type of event you come across is clearly designated, but the requirement to manually move across such a barren overworld to reach them feels a bit unnecessary at times. 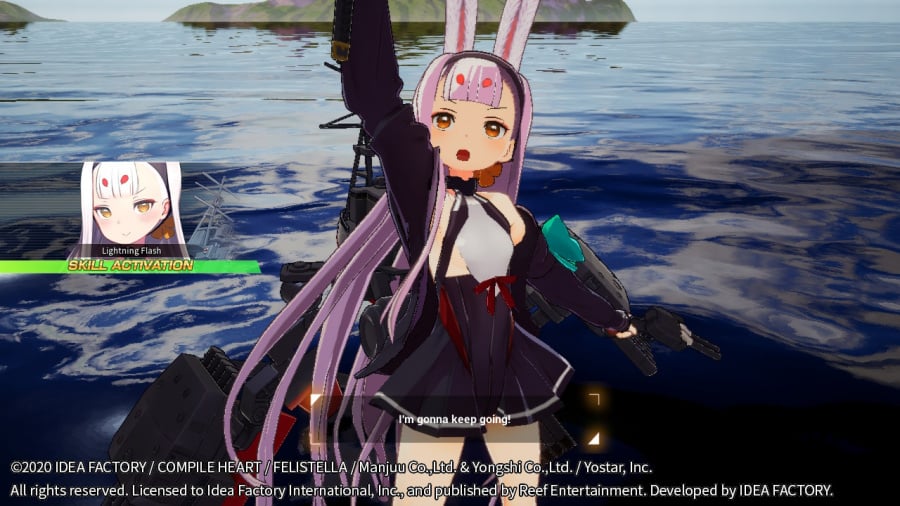 The combat sequences are, in a word, agonising. They’re slow, clunky, and there’s absolutely no strategy involved in succeeding. Prior to each battle, you’re prompted to set up your party, including a group of characters comprising your main fleet, and a separate group making up the support fleet. All of the characters can be levelled up simply by engaging in combat, and most have their own range of abilities and weapons. The problem is there’s absolutely no need to spend any time formulating any strategy because it simply doesn’t make a lick of difference once you’re in the thick of battle.

Instead, the combat events see you and your squad simply moving around in a circle, hammering the fire button until your enemies’ health has expired. The main weapons are mapped to the right shoulder buttons, with special attacks mapped to ‘A’ and ‘Y’, though there’s rarely a requirement to actually use these unless you’re absolutely sick of holding down the ‘R’ button. You can swap between your main fleet’s characters, but again, why would you? There’s no strategy involved, and no immediate danger to any of your characters; it feels, at most, like dull target practice.

To bolster the main gameplay a bit, there are a few additional features to keep you occupied. There’s a shop, where you can purchase items to assist you during battles, and a warehouse where you can view and strengthen your abilities, provided you have enough funds to do so. You can also unlock new ships/characters as you progress, opening up new abilities and stats (not that it will make any difference) that you can then use in the battle events. 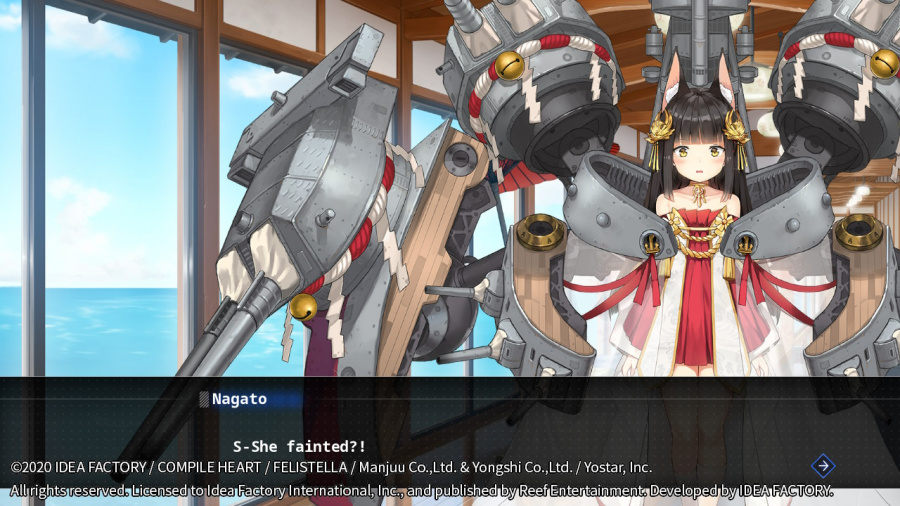 Upon completion of Chapter 1 in the main story mode, the game’s additional modes open up. These include Photo mode, where you can select your characters and arrange them against various backgrounds, changing their poses as you go: definitely a mode for fans of the overall anime-style displayed here. There’s also Extreme Battle mode, which immediately pits you against various characters and ships, and feels absolutely no different to the events in the main story mode. Overall, both modes feel tacked on; photo mode could have easily been implemented into the story missions, and the Extreme Battle mode just lacks anything to distinguish it from the battles you’ll encounter in the story.

From a visual point of view, the game is very much a mixed bag. The visual novel sequences look great, and the characters – while certainly not to everybody’s taste – are well designed for the most part, and look incredibly unique. The 3D battle sequences are pretty dire by comparison; the characters lack decent animations and the environments have absolutely no variety to them, taking place on the same body of water against the same background, over and over again. Sound design is, again, a bit mixed. The music feels a bit repetitive, and has a weird steel drum in the background at all times, bringing back painful memories of Metallica’s ‘St. Anger’ phase – and let’s be honest, no one wants that.

Azur Lane: Crosswave is a game that was best left on smartphones. The visual novel sequences are perfectly fine, and the story itself – while utterly bonkers – is interesting enough to keep you engaged, while the characters are both charming and unique. Sadly, the naval combat sequences bring down the entire experience. They’re slow, repetitive, rarely require much strategic thought, and look incredibly bland all at once. This is a game for hardcore fans of the genre only; everyone else ought to look elsewhere for their naval combat needs.

Fortnite Adds Ripley and The Xenomorph From Alien To Its Crew