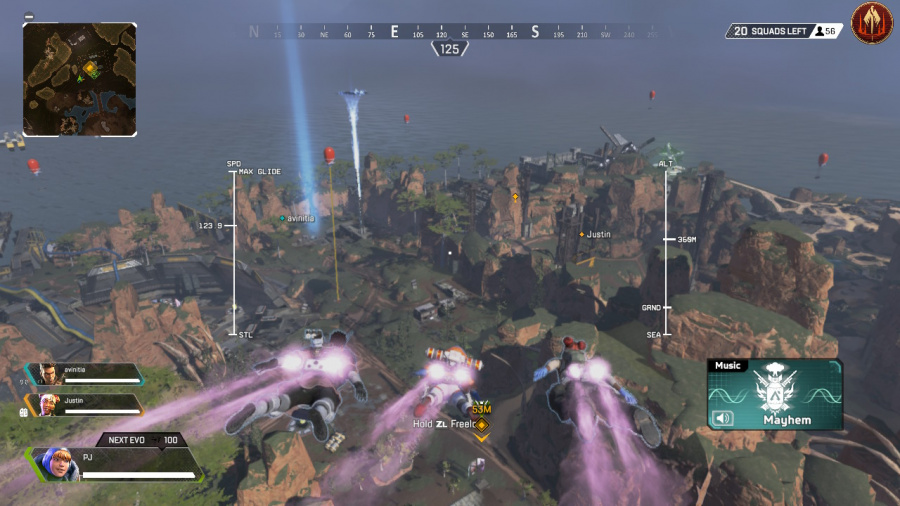 Respawn’s Apex Legends, to our minds one of the very best free-to-play Battle Royale shooters currently available on PC or console, finally makes its way to Nintendo Switch and it is, unfortunately, a real mixed bag of a port. This is at its core the same fast-paced, ping-tastic game we’ve been enjoying since 2019, but here the concessions made in order to make it playable – the overall loss of graphical fidelity, framerate dips, blurriness, unrefined controls and so on – result in an experience that feels heavily compromised and one you should definitely try for yourself before shelling out cash on any of the paid versions or battle passes currently on offer.

Panic Button, a team that has done such stellar work in the past porting the likes of Doom, Doom Eternal and Wolfenstein II: The New Colossus to Nintendo’s console, has handed in an effort here that, despite its problems, doesn’t feel lazy or half-hearted – this is the full-fat Apex Legends experience delivered onto Switch in a reasonably playable state. It’s just that the seemingly necessary downgrades that have been made in the face of the limitations of the system itself, when combined with a handful of niggling performance issues, make for an experience we could only truly recommend if you really don’t have any other way of playing the game. 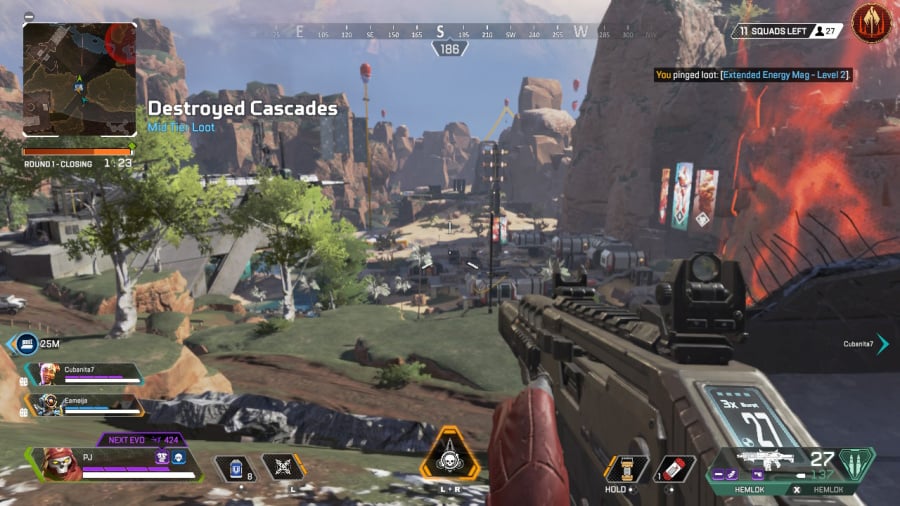 In docked mode, Apex Legends on Nintendo Switch is presented at 720p and plays, for the most part, at a reasonably solid 30fps which, on paper, sounds fine; we weren’t for a second expecting a higher resolution or for this type of fast-paced shooter to arrive here with its guns blazing at 60fps. However, in actual practice, what we’ve got is a game that looks disappointingly muddy and blurred when played on a big screen, with messy textures loading in all over the shop as you move around its environments and distant geometry and enemies hard to parse as you scan your surroundings for threats, loot or vantage points.

In handheld, where the game is presented at 572p, the visuals fare slightly better with the smaller screen hiding a multitude of graphical shortcomings and giving everything a crisper, cleaner feel. However, it’s also here where this port’s framerate problems really begin to rear their head, most especially when combat gets close-ranged and frantic – as it so often does in Apex Legends – resulting in a level of jankiness that can make firefights feel like a hit-and-hope mess rather than the slick, refined and highly tactical engagements for which this game is best known. The field of view, which quite understandably cannot be altered in this version for performance reasons, also feels restrictive when playing on such a small screen and, when combined with those muddy textures, framerate niggles and controls that feel a tad spongy when playing with the console’s default Joy-Con, results in a rather headache-inducing experience when played for any reasonable amount of time. 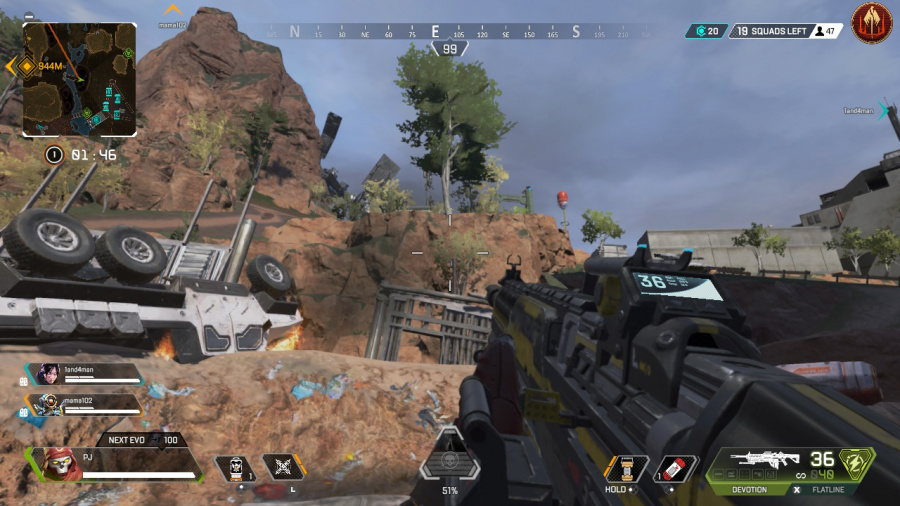 Those framerate issues during close-range combat aren’t entirely exclusive to handheld mode either, unfortunately. We experienced dips down to around the mid-twenties when things got really heated during docked play, and situations where you’re trying to revive teammates whilst under fire or engaging in melee combat with opponents tend to feel and look janky and rough. The technical shortcomings really do create constant niggling problems with regards to the game’s combat. On the one hand, long-range engagements are hampered by a graphical downgrade that makes far-off enemies quite hard to see and controls that – even with gyro-aiming enabled – don’t feel particularly reliable at distance unless you’ve invested in a Pro Controller or perhaps some Hori split Joy-Cons for handheld play. On the other, close encounters introduce a level of stuttering that really takes the shine off things, with exciting and dramatic clashes rendered clunky and oftentimes infuriating.

Having said all of that, the strength of Apex Legends’ excellent core gameplay does still, somehow, manage to shine through at times. There’s fun to be had here if you can adjust your expectations and make do; it’s just fun that, as things currently stand, feels unreliable and more than a little compromised. All of the updates, tweaks, new characters, battle passes, timed events and change-ups you’ll find in other versions of the game are present and correct here and, if Panic Button can somehow iron out the framerate issues and provide a patch or two to deal with a few graphical issues, this port could perhaps still deliver as a passable version of one of our absolute favourite Battle Royale games. 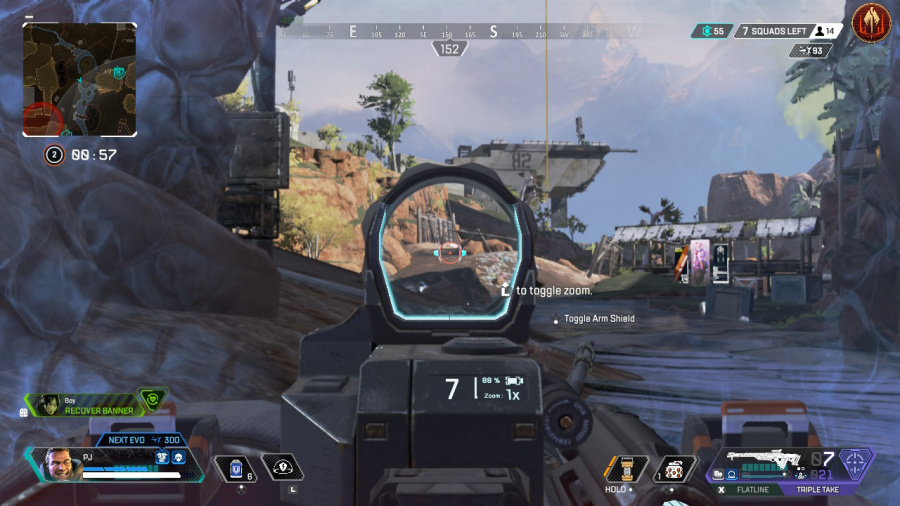 In the meantime, however, one thing we suggest you do immediately if you are in it for the long-haul with Apex Legends on Switch is to jump right into the game’s settings and turn off cross-play with other platforms. You’ll most likely be in for a slightly longer wait between matches, for sure, but this does away with so much of the frustration of being absolutely out-gunned by teams of players who are hunting you down at 4K/60FPS – not the most level of playing fields, we’re sure you’ll agree. Control-wise, too, if you have a Switch Pro Controller or Hori Split Pad Pro, get them hooked up right away as the default Joy-Con really don’t feel like they’re up to the task here, even with gyroscopic aiming enabled.

Overall then, Apex Legends on Switch is a real mixed bag as things currently stand. This is an excellent game that’s still fun to play – even in this heavily compromised state – but there’s just no getting away from the issues introduced by framerate problems, muddy textures, blurriness, underwhelming default controls and just a general level of technical jankiness that eats away at your enjoyment over time. Of course, it’s free-to-play – although it will cost you 25GB of your precious internal storage – so there’s no harm in having a go and seeing how your tolerance levels fare. However, we’d recommend you stick to running-and-gunning through King’s Canyon on another platform, unless we have absolutely no other choice.

Apex Legends on Switch delivers the full-fat Battle Royale experience we know and love in a heavily compromised state. There’s still fun to be had here if you can lower your expectations but, over time, the massive graphical downgrade and niggling framerate and performance issues begin to grate. If you’ve got no other choice but to play on Switch we’d recommend diving in and seeing how you fare before splashing any cash on paid versions or battle passes but, overall, this is a game that is best experienced on other platforms – at least until Panic Button can steady the ship somewhat with future updates.

Bethesda's Future Games Will Be "Where Game Pass Exists"